11 Reasons Why Legislators Should Vote “No” On The Stadium Deal - Battle Born Progress
515
post-template-default,single,single-post,postid-515,single-format-standard,ajax_fade,page_not_loaded,,qode-title-hidden,qode-child-theme-ver-1.0.0,qode-theme-ver-13.7,qode-theme-bridge,wpb-js-composer js-comp-ver-5.4.5,vc_responsive

A special session on the proposed Raiders stadium is upon us. This deal sounds too good to be true so we decided to do some research and here are just some of the reasons why this deal is bad for Nevada. 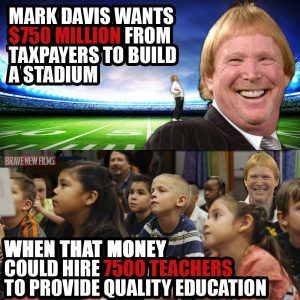 1. Oakland still has until 2026 to pay off the $200 million renovation of the Oakland Coliseum, negotiated in the 1990s.

“Speaking to the San Francisco Chronicle, Schaaf said spending taxpayer money to finance a new stadium for the Raiders doesn’t make sense considering the city is still picking up the tab for renovations it made to Oakland Coliseum in the 1990s. The city shelled out $200 million to renovate the stadium for the Raiders and Athletics, and the debt won’t be paid off until 2026.”

“’That money we’re paying now is general-fund money we could spend on police, parks or libraries,’ Schaaf told the newspaper.’”

2. The Raiders have a long history of dividing communities

“Robert Scott, 37, a gardener who lives a world away from Montclair in one of Oakland’s struggling neighborhoods, shares Ferreira’s hurt at the Raiders’ snub.”

“‘They just upped and left Oakland and went to L.A.,” he said on a recent chilly morning while riding his bicycle in an East Oakland neighborhood. “Seems like they just turned on us. The A’s (the Oakland Athletics baseball team) didn’t leave us.'”

“The depth of bitterness over the Raiders’ departure testifies to the spell the team still holds over much of this town. Just as many Oaklanders fear the city will rue the day it signs another contract with Davis, others are relishing the prospect of welcoming home their prodigal sons.”

3. Oakland had to fire 138 police officers

“Oakland, California, the fifth-most crime ridden city in America, faced a $32 million budget deficit in fiscal 2011. It closed the gap by shrinking its police force by 18 percent, shedding 138 officers including 80 dismissals.”

“Untouched was the $14 million that the city pays to stage 10 games a season for the National Football League’s Oakland Raiders and to host Major League Baseball’s Athletics in the O.co Coliseum. The funds include operations and costs related to a swap contract, and are supplemented by $10 million from surrounding Alameda County, based on data compiled by Bloomberg from public records.”

“‘If someone calls 911, you’re looking at an indeterminate amount of time before an officer can respond,’ says Barry Donelan, 40, a sergeant who is president of the Oakland police union. ‘Citizens are suffering.’ Reversing a renewed rise in violent crime is out of the question, he says.”

4.The Raiders’ move to Vegas isn’t a done deal

“Las Vegas knows better than anybody that the only sure bet is to control the house. Only this time, in Sin City’s attempt to snatch the Raiders, it’s the NFL that flings the cards out of the chute. And it looks as if the league wants the Raiders to stay in Oakland.”

“Adelson is in for $650 million to move the Raiders to Las Vegas. The team’s principal owner, Mark Davis – despite telling Raiders fans last year, ‘As God as my judge, I’m with you all’ – has committed $500 million to building a proposed $1.9 billion, 65,000-seat stadium off the Strip. It should be an interesting verdict.”

5. We should listen to economists sounding the alarm that deals like this are bad

“Roger Noll — a Stanford professor emeritus specializing in the economics of sports — says, ‘NFL stadiums do not generate significant local economic growth, and the incremental tax revenue is not sufficient to cover any significant financial contribution by the city.'”

“In an article last year, Noll ‘pointed out the cities of Oakland and St. Louis are still making substantial annual payments on the debts that remain for now-obsolete stadiums that were built to lure the Oakland Raiders and St. Louis Rams away from Los Angeles in the 1990s.'”

“Most economists don’t like stadium subsidies. A 2005 survey of a random sample of American Economic Association members found that 58 percent ‘strongly agreed’ and 28 percent ‘agreed’ that ‘Local and state governments in the U.S. should eliminate subsidies to professional sports franchises.’ Only 5 percent disagreed.”

6. We don’t need a stadium to increase tourism to Las Vegas

“Overall occupancy figures create grounds to doubt that figure. Last year, according to the Las Vegas Convention and Visitors Authority, occupancy rates fell from a peak of 92.8% in October to 78.5% in December. On the Strip, where Adelson’s Venetian resort is, occupancy was nearly 80%. Average occupancy year-round was 87.7%. Even if visitorship dips in the winter, one has to ask how much difference a stadium would make, and who would get the money. It’s worth noting, in any case, that Vegas has been growing smartly in recent years, with visitorship rising to a record 42.3 million last year, a gain of 16.4% over 2009, the post-recession nadir. Without a stadium, that is.”

“65 of these stadiums, about a third, have already lost their professional teams and/or been demolished. These ghost stadiums cost $8.8 billion, of which $6.6 billion (75 percent) was paid for by the public. Many of these included horrible outer-city 1960s and ’70s megastadiums that were largely funded with taxpayer dollars, only to be shuttered in the ’90s and early ’00s.” 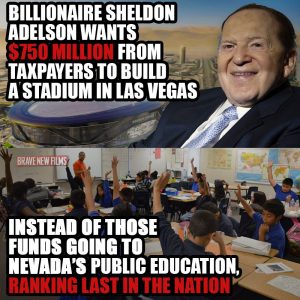 8. The public is at a disadvantage

“The public is at a disadvantage in negotiating those deals with sports teams and leagues, which have a monopoly on the supply of franchises and opaque finances, Long writes. The total cost of sport facilities has received little attention from researchers in part ‘because most economic analyses demonstrate that sports facilities produce very few or no net new economic benefits relative to construction costs alone, and so, in this sense, more accurate cost estimates would only serve to reinforce a case already made.'”

“Public officials shouldn’t spend any more than necessary to secure the participation of the local team, she writes. Small cities tend to fare worse than larger ones, because they either have to offer more money to keep an existing franchise from moving to a larger market, or they have to put up more to compensate a team moving from a larger market”

9. If Adelson has millions for Super-PACs why can’t he foot the bill?

“There are already signs that more waves of cash are coming before Election Day. Casino mogul Sheldon Adelson and his wife, Miriam — who jumped in late this year, giving $21.5 million in August to GOP super PACs defending Senate candidates — are directing millions into a group that has launched a new anti-Clinton effort.”

10. Stadiums do not boost local economies

“When an NFL team wants to build a new stadium, it often argues that the facility would boost the local economy.”

“But that is not true, says Roger Noll, a Stanford professor emeritus in economics. A former senior economist for the President’s Council of Economic Advisers, Noll is an expert on the economics of sports.”

‘”‘NFL stadiums do not generate significant local economic growth, and the incremental tax revenue is not sufficient to cover any significant financial contribution by the city,’ said Noll, a senior fellow at the Stanford Institute for Economic Policy Research. He has written articles and books and given talks on the public financing of sports stadiums.'”

11. It’s time for the billionaires to pony up

“According to Harvard professor Judith Grant Long and economist Andrew Zimbalist, the average public contribution to the total capital and operating cost per sports stadium from 2000 to 2006 was between $249 and $280 million. A fantastic interactive map at Deadspin estimates that the total cost to the public of the 78 pro stadiums built or renovated between 1991 and 2004 was nearly $16 billion. That’s enough to build three Nimitz-class nuclear-powered aircraft carriers. Or fund, in today’s dollars, 15 Saturn V moon rocket launches — three more than the number of launches in the entire Apollo/Skylab program. It’s also more than what Chrysler received in the Great Recession-triggered auto industry bailout ($10.5 billion), and bigger than the 2010 GDP of 84 different nations.”