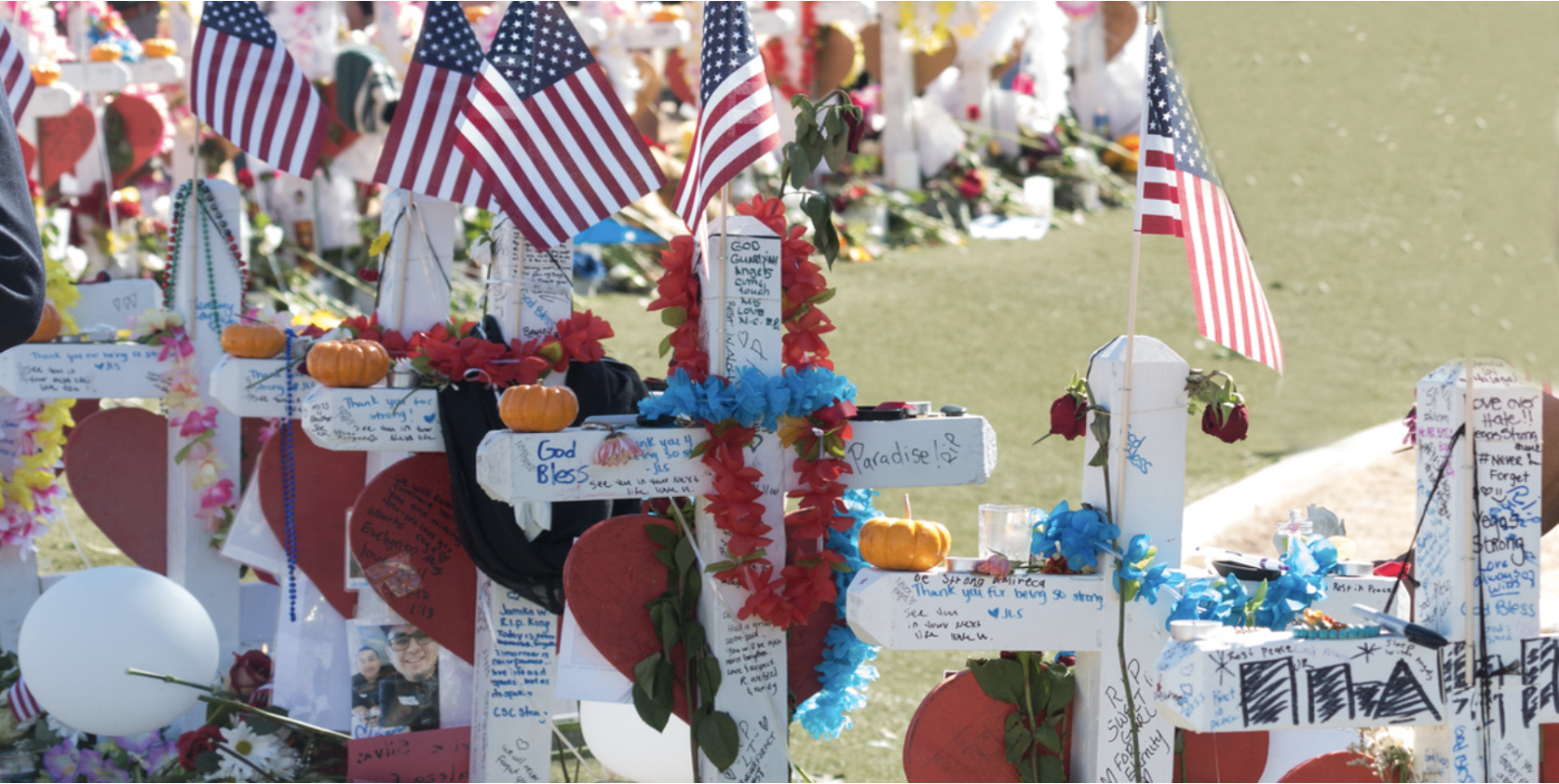 LAS VEGAS, NV – With the fifth memorial of the 1 October mass shooting today, Nevadans around the state prepare to pay their respects to those tragically and senselessly killed and wounded at the Route 91 festival in 2017. However, the gun lobby is as active as ever supporting political candidates who will cave to their demands, even as Nevadans brace for the remembrance of the deadliest mass shooting in modern American history.

Since this past weekend, the Nevada Rifle Association Political Victory Fund (NRA-PVF) has run radio ads in support of Sheriff Joe Lombardo for Nevada Governor, targeted primarily at the Gardnerville/Minden area, via 99.1 FM. The ad features sirens and emergency dispatch sound effects, mimicking a violent crime scene, not unlike the immediate aftermath of the 1 October shooting. Concurrently, the NRA Institute for Legislative Action on Meta platforms, has had ads active since September 15th which attempt to discredit Senator Catherine Cortez Masto and aid in the election of Adam Laxalt for U.S. Senate. The ads are running this week using rhetoric including language like “Left-wing politicians open the prison doors,” and “anti-gun radicals like Steve Sisolak want to take away your right to self-defense.”

“The National Rifle Association Political Victory Fund (NRA-PVF) is ramping up their disgusting rhetoric and mischaracterizing Nevada laws in an attempt to attack Governor Sisolak and demonstrate support for Joe Lombardo. It doesn’t matter to them that this week is filled with remembrance, mourning, and healing because of the worst mass shooting in modern history, which happened in Las Vegas on October 1, 2017. One of the radio ads opens with sirens and a 911 operator. The very sounds survivors heard that night, as they ran for safety and tried to find secure locations, are being used in a political ad to further Joe Lombardo, the Sheriff who oversaw the 1 October tragedy. Lombardo won their endorsement by attacking existing gun laws that his department repeatedly failed to execute. They conveniently leave out the ethics investigation, into Lombardo, which is looking at his use of taxpayer dollars to advance his political campaign. This speaks to the lack of dignity and character shown by many of the actors within the gun lobby. Their bottom line is getting anti-gun safety candidates elected, regardless of the cost to lives, freedom, and liberty. For the gun lobby, the freedom of bodily autonomy, or the freedom to go to the grocery store is secondary to the gun manufacturers’ bottom line.”

“Knowing that 1 October is approaching, the NRA Institute for Legislative Action (NRA-ILA) has had ads running to support Laxalt using rhetoric like “anti-gun extremists,” referring to Senator Cortez Masto. To them, everything except unbridled access to firearms is extremist. Adding insult to injury the NRA Institute for Legislative Action is also holding a Pro Gun Club event Saturday, October 1st, 2022 in Boulder City, Nevada. 1 October signifies a tremendous loss of life and a day that most Las Vegans will never forget. The NRA-ILA coming to town for a pro-gun event signals their disgusting commitment to the very weapons that enable mass shooters to kill dozens in minutes. They refuse to acknowledge the majority of Americans who support common-sense gun safety legislation. They disrespect all survivors who have to endure mass shootings, school shootings, community violence, and domestic violence at the hands of the very weapons they recklessly market nationwide.”

“The audacity of the gun lobby to continue pushing extreme candidates who will stop at nothing to dismantle existing gun laws is astonishing. The NRA has literally learned nothing since Columbine when they refused to cancel their conference in Denver. Having started as a gun safety education organization they have devolved into a lobbyist group that refuses to hold the gun industry accountable for the destruction their products cause. The gun lobby knows that by backing Laxalt and Lombardo they are ensuring they will have strong allies in Nevada who will be beholden to them and help further their profits while undoing the progress Nevada has made.”

“Folks like Adam Laxalt and Joe Lombardo don’t care about solving this issue. Their goal is power and money. This is evidenced by the continued dedication to gun rights despite mass tragedies. Both candidates have been endorsed by the National Rifle Association and each candidate touts their commitment to the Second Amendment well before any proposal to solve the gun violence epidemic.”