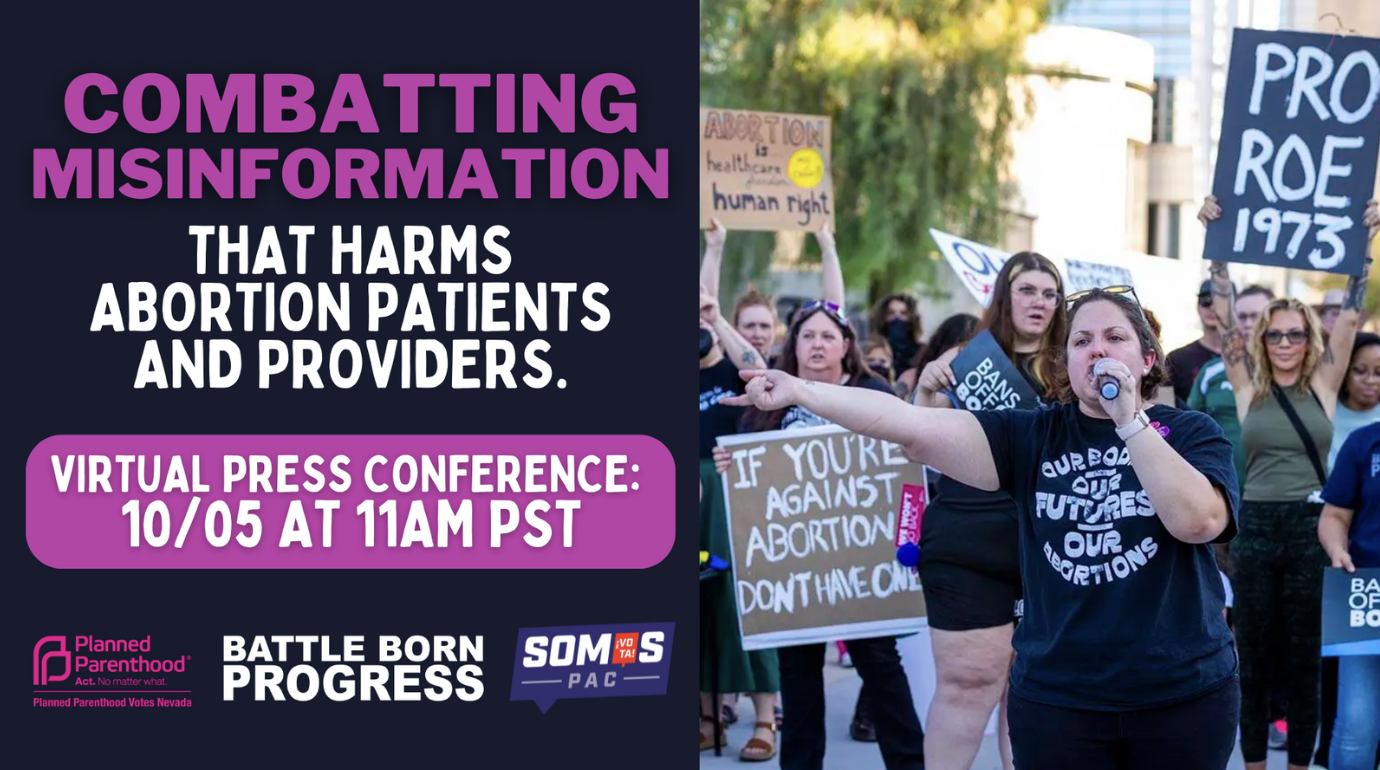 NEVADA – Today, community advocates and organizations gathered virtually for a press conference responding to the misinformation around abortion laws in Nevada. The goal of anti-abortion politicians is to ban or severely limit access to abortion services. Today, we heard from storytellers, and advocates about how this will impact Nevada community members. Fueling the concern around abortion is the consistent misinformation coming from political stakeholders and candidates themselves. This response comes after a recent op-ed writer claimed that anti-abortion beliefs do not matter and that no harm will come to Nevada abortion law. This is inherently false and it is clear that abortion access can and will be threatened by politicians who seek to control bodily autonomy in Nevada and beyond.

“It would be nice to believe that abortion will remain legal in Nevada and the United States. However, after Supreme Court Justices saw fit to undo decades of rights many Nevadans, including me, refuse to believe abortion is not on the chopping block. Politicians like Adam Laxalt have made it clear they do not believe abortion is a right nor do they believe it is a necessary medical procedure. This is evidenced by Laxalt calling Roe a “joke” and by his record as Attorney General. No matter how they dress this topic up in misinformation and disinformation Nevadans know the truth. These politicians will do only what is best for them and their donors. The rest of us are on our own. That is why we need strong leaders like Governor Sisolak who support access to abortion and who will fight to ensure abortion remains safe & legal in Nevada.

“As a provider, I have seen first hand the importance of access to abortion services. Patients with severe fetal abnormalities, heart conditions, severe health conditions, and victims of rape, incest, domestic violence, or birth control failures all require access to reproductive healthcare. Politicians seeking to restrict access to abortion services are doing so under the guise of misinformation and disinformation. Nevada has already seen an increase in patients seeking abortion from out of state due to the Roe decision over the summer. Traveling to seek an abortion is an expensive endeavor which means many of the most vulnerable in our society do not have access because they cannot afford to travel, pay for the procedure, stay in a hotel to recover, and travel back home. This is unacceptable in a developed, modern nation. We must do better for ourselves and those who are seeking abortion services.”

“After decades of campaigning on taking away our rights, anti-abortion politicians cannot hide behind the foresight of Nevadans who knew the end-game of their movement now that they’re faced with the consequences of their actions.

People across the country now rely on Nevada as a reliable point of access for abortion care, and politicians like Adam Laxalt and Joe Lombardo, who have made clear that they do support restrictions on abortion care, cannot be trusted to defend the rights that Nevadans have worked so hard to protect in the face of a federal abortion ban or other limits on care like parental notifications and mandatory waiting periods. That is why we must work hard to elect tried and true champions for abortion rights and reproductive health care like Gov. Steve Sisolak and Sen. Catherine Cortez Masto this November.”

“Nevadans are facing the fight of our lives, and this upcoming election is placing a spotlight on the modern-day war on women. Across the nation, women of color have been disproportionately underserved in mental health care, prenatal care, emergency care, and general health care. In such uneasy times, all folks that can become pregnant have everything to lose—our lives are at risk.

Nevada has been a sanctuary state because of people like Senator Catherine Cortez Masto, who is dedicated to protecting women. Nevadans cannot afford to put our care, our rights, or our choice in the hands of careless career politicians like Lombardo and Laxalt. These men have consistently and unapologetically placed their personal gain over the safety of our communities.

We deserve a fighting chance! That is why we must turn-out in record numbers to vote for our proven allies. The best defense para nuestra comunidades is re-electing la Senadora Catherine Cortez Masto and Governor Sisolak—two leaders who have never backed down from fighting for the US.”