How will Laxalt “Protect Nevada” if he can’t answer a basic question? 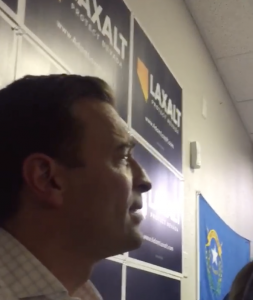 Las Vegas, NV – Today, Adam Laxalt held a campaign rally in Las Vegas and when asked whether he’d stand up against attacks on Nevadans’ healthcare, Laxalt simply ignored the question.

Question for Adam Laxalt, “are you going to be standing up to attacks by Congress on our healthcare, like Governor Sandoval did?”

This interaction begs the question: Adam Laxalt’s slogan is “Protect Nevada” but how can he protect our state when he can’t even answer a simple question on the most important issue for Nevada voters?

While Adam Laxalt could not respond to this question, here’s where he stands on the number one issue for Nevada voters:

These are just two example of why Laxalt wouldn’t want to say whether or not he’d protect Nevadans’ healthcare, because he clearly has not and will not. Earlier this year, Public Policy Polling found over a quarter of Nevada voters consider healthcare the number one issue in 2018, but apparently, Laxalt didn’t receive the memo and will continue to ignore Nevadans and fail to protect our healthcare.