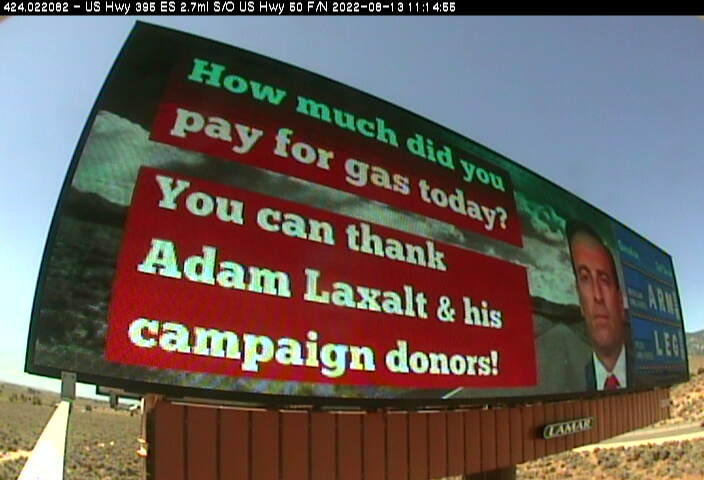 WASHOE COUNTY, NV – Today, Battle Born Progress unveiled a billboard on U.S. Highway 395 facing traffic passing through Carson City and heading into Gardnerville and Minden. This billboard is in response to the annual Basque Fry event started by 2022 Republican Senate nominee Adam Laxalt. There are also location-targeted ads running to compliment the billboard.

“Each year, Nevada’s far-right politicians gather in Gardnerville, fried lamb testicles in-hand, to rally for out-of-touch policies that distract from the real issues facing Nevadans. This year’s headliner, Senator Ted Cruz, truly exemplifies this spirit of divisiveness and opportunism as he takes yet another vacation away from his constituents. Adam Laxalt and Joe Lombardo will join him this weekend in peddling nonsense and disinformation,” Annette Magnus, Executive Director for Battle Born Progress, said. “While Laxalt goes on and on about high gas prices he conveniently leaves out his ties to Big Oil. He defends these wealthy corporations as they price-gouge regular Nevadans for record profits, as long as the campaign cash keeps flowing. This shows where his loyalty lies.

“Nevadans know better than to listen to Adam Laxalt’s claims that Democrats in Congress are to blame for high gas prices and inflation. The reality is that cynical grifters like Laxalt attempt to exploit Nevada working families to increase their own power and fill his own campaign coffers. We hope Basque Fry attendees will be inspired to research Laxalt’s ties to wealthy oil and gas corporations as they fill up their tank on their trip down the U.S. 395.”