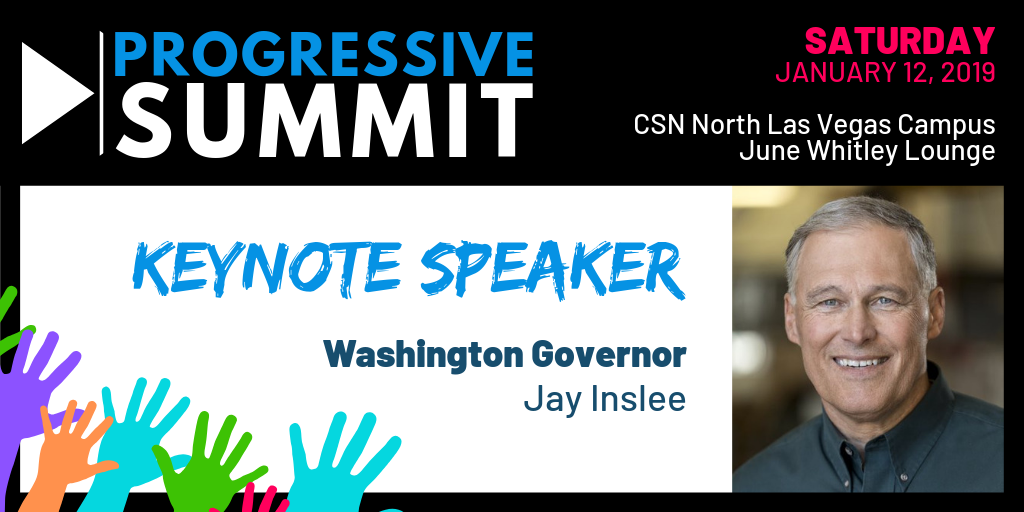 Las Vegas, NV— On January 12th and 13th, Battle Born Progress will host it’s 5th annual Progressive Summit, with co-hosts the CSN Native American Alliance and the CSN Women’s Alliance. Over the weekend, Nevadans will come together for progressive workshops and policy discussions led by Nevada’s organizers, activists, and elected officials. Governor Jay Inslee of Washington will deliver a keynote address to begin the Summit on Saturday.

In addition, elected officials scheduled to speak will include Senator Jacky Rosen, Congresswoman Susie Lee, Attorney General Aaron Ford, and members of the Nevada Senate and Assembly as well as thought leaders from both statewide and national organizations.

The purpose of the Progressive Summit is to arm activists with the tools and resources necessary to mobilize their communities around the issues that they care about before legislative session begins. The Summit will bring together community members from across Nevada and will feature speakers, workshops, and seminars on issues related to economic justice, clean energy, education, voting rights, LGBTQIA* communities, and Nevada’s Indigenous community.

“We are beyond excited to have Governor Inslee join us for our 5th annual Progressive Summit. This year’s Summit is drawing in big names with big ideas on forwarding progressive policies and we cannot wait to hear what Governor Inslee is working on in Washington state. In this chaotic time nationally, it is important to focus on improving state policy to move our communities forward. With all Governor Inslee has championed in Washington, Nevada’s progressive community is thrilled to learn from his leadership.

Governor Inslee’s work was recently highlighted by The Atlantic because ‘on his watch, the state has boosted health care, increased access to early-childhood education and college, raised the minimum wage, expanded paid family leave, invested in infrastructure, and established in-state net neutrality, all while leading the country in job growth, overall personal-income growth, and GDP.’ This showcases the impressive accomplishments of Governor Inslee and we cannot wait to have him join us on Saturday in Las Vegas!”

WHAT: Issue-based trainings, workshops, and panels