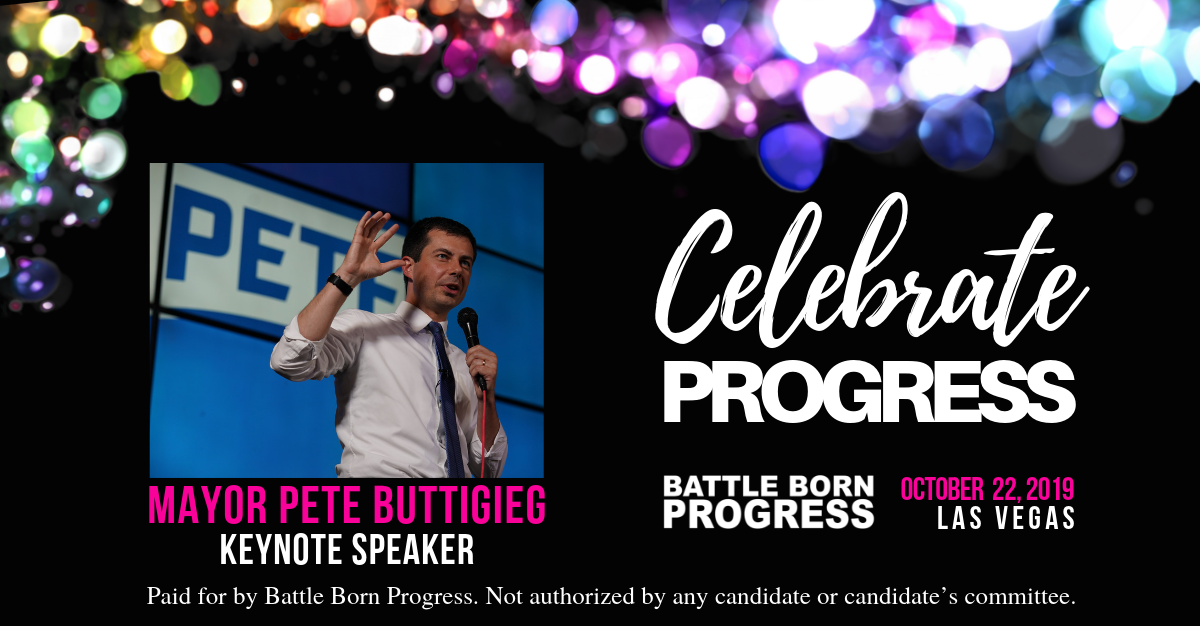 Posted at 23:29h in News, Releases by admin
0 Likes
Share

RSVP for Press Credentialing
All press MUST RSVP

The evening’s keynote speech will be delivered by Mayor of South Bend, Indiana, Pete Buttigieg. Mayor Buttigieg has spent the last 8 years serving as Mayor of South Bend, serving his hometown, fighting for progressive change in the heart of the midwest. He helped turn his town once described by a national publication as “dying” into a growing city creating good jobs and opportunity for his community. From climate change to the rise of white nationalism to exploding health care costs to wages that don’t keep up with soaring bills, Buttigieg is now running for President to offer a new approach to U.S. politics.

The Progressive Leader of the Year Award will be awarded to Nevada State Assemblyman, Speaker Jason Frierson. Speaker Frierson represents Assembly District 8, and has served as Speaker of the Assembly for the past 3 years. In that short time, Frierson has shown unprecedented leadership of his caucus and has successfully moved groundbreaking legislation through the legislature to overhaul voting rights, raise the minimum wage, increase funding for public education, and more.

The Progressive Legacy Award will be given to Nancy E. Kuhns, posthumously accepted by her husband Jeffrey Coller. An anti-war protester in her younger years, Kuhns spent her life fighting tirelessly for women’s rights, immigrant rights, LGBTQ rights and was always willing to protest for progressive issues. In addition to her fighting spirit, Kuhns was a mentor to young progressives, dreamers and many progressive candidates.

Luz Gray, associate editor for the Nevada Independent en Español, will be named as the 2019 Voice of Reason. Formerly of Univision Radio, Gray has been a giant in Nevada’s Spanish-language media network, even before joining The Indy. For years, her work has kept Spanish-speaking Nevadans informed about politics, events, and breaking stories in their community and beyond.

The Rising Progressive Leader Award will be awarded to Katherine Lorenzo. Lorenzo has been at the forefront of organizing around issues of access to clean energy for communities of color for years, inspiring and mobilizing countless volunteers to take action. She continues to dedicate her career to crafting equitable clean energy policies in a way that empowers those oft-ignored voices.

The Progressive Activist Award will be given to Erika Castro. Castro has been a fearless advocate for environmental justice, criminal justice reform, and immigrant rights as an organizer for the Progressive Leadership Alliance of Nevada (PLAN). For more than half a decade, Castro has fought for dignity and equality for some of Nevada’s most marginalized communities with unmatched courage and dedication.

One APIA Nevada will receive the Community Partner of the Year Award for their breakout success with civic engagement and development among Asian and Pacific Islander Americans in Nevada. On issues of education, healthcare, immigration, the 2020 census, and more, One APIA Nevada continues to perform game-changing work to build power in one of Nevada’s fastest growing communities.

Classic Jewel co-owner, Ryan Brown, will receive the Progressive Business of the Year Award. Brown and her hard-working staff have graciously hosted various organizations and activists for fundraisers and events. As a black-owned small business, Classic Jewel has been part of the revitalization of Downtown Las Vegas and provides one of the most comfortable and welcoming hotspots in town to network, fundraise, play trivia, or simply unwind after long hours of fighting for change.

Link to Purchase Tickets
Link to PRESS ONLY RSVP