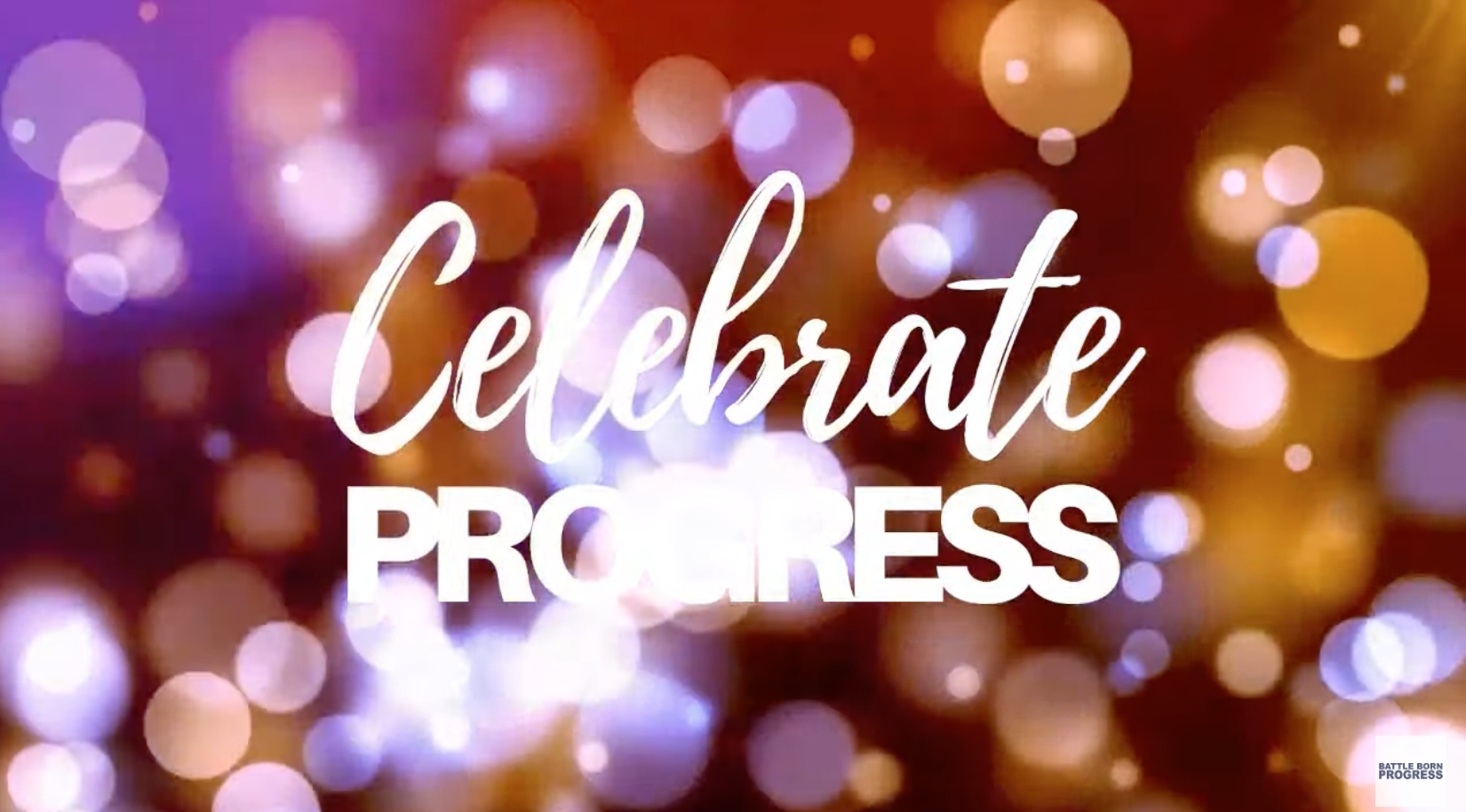 NEVADA – This evening, Battle Born Progress hosted its annual fundraising event, Celebrate Progress, in a virtual setting. The event, which was co-chaired by Assemblywoman Maggie Carlton, Brian Lee, and Craig Valdez, honored the work of several of Nevada’s community leaders, as well as activists, volunteers, journalists and organizations.

A full recording of the entire event can be found HERE. Congresswoman Giffords remarks begin at 00:00. Governor Sisolak speaks at 00:00.

“Tonight, we are overjoyed by the success of our annual fundraiser supporting the crucial communications and community organizing work our team performs each day across our state. This year, we raised more than our organization has ever raised from Celebrate Progress events in years past, and that is a testament to the extraordinary capacity of our team, the relationships we have built in our community, and the appetite Nevadans have for supporting our continued efforts in moving Nevada forward to build a state where everyone has a equitable opportunity to succeed. I’d like to thank every single person, business, and organization who made a gift this evening, and leading up to it. We truly could not do this work without you.

I’d also like to congratulate each of our honorees this year for their tireless commitment to Nevada. Each of these individuals and organizations are giants of our communities all across the state. We especially wish the best to former Lieutenant Governor Kate Marshall, our Progressive Leader of the Year recipient, who is sadly leaving us for an important role within the Biden-Harris administration. We are thankful for her service to our state and know she’ll always be a Nevadan deep down. We’d also like to thank our Governor, Steve Sisolak, for dropping in to bid her farewell, and to share some thoughtful words with our honorees, sponsors, and supporters.

Finally, I’d like to thank former Congresswoman Gabby Giffords for joining us as our keynote speaker. Since the COVID-19 pandemic began, we’ve observed the epidemic of gun violence continuing to cause harm in communities across the nation, and here in Nevada. She and her organization are powerful allies to us in the fight against the gun lobby and for sensible gun violence prevention laws that will keep our communities safe. We’ve won many important gun safety victories so far, and we won’t stop now. We’re so proud to have her join us virtually this evening.”

For 2021, Battle Born Progress will recognize the following honorees:

2021’s Progressive Leader of the Year is former Lieutenant Governor Kate Marshall. Marshall grew up in working-class neighborhoods in San Francisco as the eldest of six children. Marshall was elected Nevada’s State Treasurer in 2006 and re-elected in 2010, where she worked to get rid of no-bid contracts and off-the-book accounts, reduced spending, and making government more efficient by identifying innovative methods to increase economic development for businesses in Nevada. As Lieutenant Governor, Marshall was a prominent member of Governor Steve Sisolak’s cabinet and served as President of the State Senate. There, she oversaw and facilitated the passage of groundbreaking progressive legislation to strengthen voting rights, increase access to health care, and protect and grow Nevada’s outdoor recreation economy. Nevada will miss her dearly as she moves to accept a new job in the Biden administration.

The Progressive Legacy Award for Northern Nevada will be given to Marlene Lockard. Lockard has over 30 years of government and private sector leadership, serving as Nevada’s first female Chief of Staff under then Governor and former U.S. Senator Richard Bryan. Lockard’s background in public policy, technology and government process led her to form her own consulting firm in 2003, The Lockard Group. Lockard has represented numerous clients on behalf of their government affairs and issue advocacy needs and has a long record of involvement in community activity, serving as Chair for the Domestic Violence Resource Center Board, legislative advocate for the Nevada Women’s Lobby, founding member of the Nevada Coalition for Women’s Equity, member of the Washoe County School District Volunteer Services Advisory Board, past Chair for the Nevada Women’s Fund, and a former member of the College of Engineering Advisory Board for UNR.

Southern Nevada’s Progressive Legacy Award will go to Bradley Schrager. Schrager, a country boy from downstate Illinois who has lived in Nevada for fifteen years, is best known as an election lawyer, working diligently to protect voting rights and, most recently, helping to beat back anti-democratic attacks over the course of the 2020 election cycle. Schrager has also worked extensively on behalf of low-wage workers, for whom the struggle against wage theft is a fight every day of their lives. The team at his law firm, Wolf Rifkin, has put over $30 million back into the pockets of Nevada’s minimum wage employees in recent years.

The Northern Nevada Progressive Activist of the Year Awards will be given to Jennifer Ann Cantley. Cantley is a mother of three boys, a Reiki Master and Teacher, and owner of her consulting firm One Source Network LLC, which is now growing into a nonprofit called One Source Action, to better serve rural and underrepresented communities of Nevada. Cantley started consulting for Moms Clean Air Force four years ago by opening their Nevada chapter, after being a member for six months, to unite against air pollution – including the urgent crisis of our changing climate – to protect our children’s health. Jennifer’s latest heart project is to help the Atsa Koodakuh wyh Nuwu (People of Red Mountain) of the Fort McDermitt Reservation to protect their people from the Thacker Pass lithium mining project.

The Southern Nevada Progressive Activist of the Year is Akiko Cooks. Cooks left her native state of California after completing training as a psychiatric technician, settling in Las Vegas, Nevada. She thought that she found her calling as the founder, owner, and operations executive of two large behavioral treatment facilities there until an unexpected wake-up call roused her. In 2019, photographs of Akiko’s teenaged son, along with eight other Black children, were circulated on social media targeting them for what was called, “Columbine 2” by three other students at his school. The school’s and local law enforcement’s lethargic responses thrust Akiko into action and onto her present trajectory. Organizing with parents of the other targeted youth, Cooks co-founded #1865 No Racism in Schools. Cooks is also a Community Organizer with the Mass Liberation Project NV, a de-incarceration grassroots activism project focused on ending mass incarceration in Nevada, and beyond.

The Community Service Award will be given to Lisa Levine. Levine is the principal and founder of Sagebrush Strategies, a public affairs firm specializing in business development, community and government relations. She spent more than a decade working in Nevada politics and government, including serving as the longtime political director and senior advisor to Congresswoman Dina Titus. Levine was appointed to the Nevada System of Higher Education Board of Regents by Governor Steve Sisolak to help mitigate budget cuts in the midst of the pandemic. She continues to be an education advocate by participating in the UNLV Alumni Advocacy Committee, Million Women Mentors of Nevada, Public Education Foundation, and Women’s Research Institute of Nevada. She’s an appointee to the Nevada Legislative Statutory Committee on Industrial Programs and previously served on the board of NSPCA and was an appointee to Clark County’s Animal Advisory Board. Home means Nevada for Levine, her longtime partner Andrew, and their treasured shelter pets Lacey & Samara. She is currently completing a Ph.D. in public affairs at UNLV.

2021’s Rising Progressive Leader will be awarded to Taylor Patterson. Patterson is an enrolled member of the Bishop Paiute Tribe and lifelong Nevada resident. She is the Executive Director for Native Voters Alliance – Nevada, an organization that promotes Native American engagement at all levels of the political process as well as promoting Native concerns. She continues to fight for recognition of Indigenous people and issues at all levels.

This year’s Voice of Reason Award will be presented to Jeff Gillan. Gillan is an award-winning veteran broadcast journalist, whose career has spanned four states, five stations and many memorable moments. It’s been a 30-plus year career with a front seat to history. Gillan joined KSNV-TV in November 2009 as Managing Editor. In 2013, he moved from management back to the anchor desk, debuting KSNV’s 3PM. newscast to top ratings. In 2015, Gillan moved to full-time reporting. His work that year earned him an EMMY nomination for Best Reporter and earned him an EMMY for his role covering The Cosmopolitan fire. In 2018, Gillan won an EMMY for Best Reporter for his work in 2017. Gillan’s technique as a thoughtful and intelligent interviewer has secured his legacy as an exceptional Nevada journalist.

The Progressive Partner of the Year will be awarded to both the Nevada Justice Association (NJA) and the Progressive Leadership Alliance of Nevada (PLAN).

The NJA is an organization of independent lawyers who represent consumers and share the common goal of improving the civil justice system. Their members are fierce advocates for access to justice, fairness and ensuring every Nevadans’ voice is heard and their rights protected. NJA strives to educate and arm our members with the best information and education possible to make them the best lawyers in the country. NJA believes in people over profits.

PLAN was founded in 1994 by Northern Nevada activists to build a fair and just Nevada that puts people and planet first. PLAN organizes with front line communities and directly impacted leaders to fight for community investments and policy changes that improve people’s lives. Since 1994, PLAN has grown from 12 original founding member groups to a current membership of nearly 30 organizations, labor unions, and direct service NGOs, including Battle Born Progress. PLAN works together in strategic alignment with these partners to build progressive power in Nevada.

The 2021 Progressive Business of the Year is Gaia Flowers. Gaia Flowers is a locally owned and operated flower shop. Based in Las Vegas, they offer fresh, sustainable products all across the valley. Gaia Flowers supports local artists, gardeners, nonprofits, and Southern Nevadans who have as much passion for Mother Earth as they do.