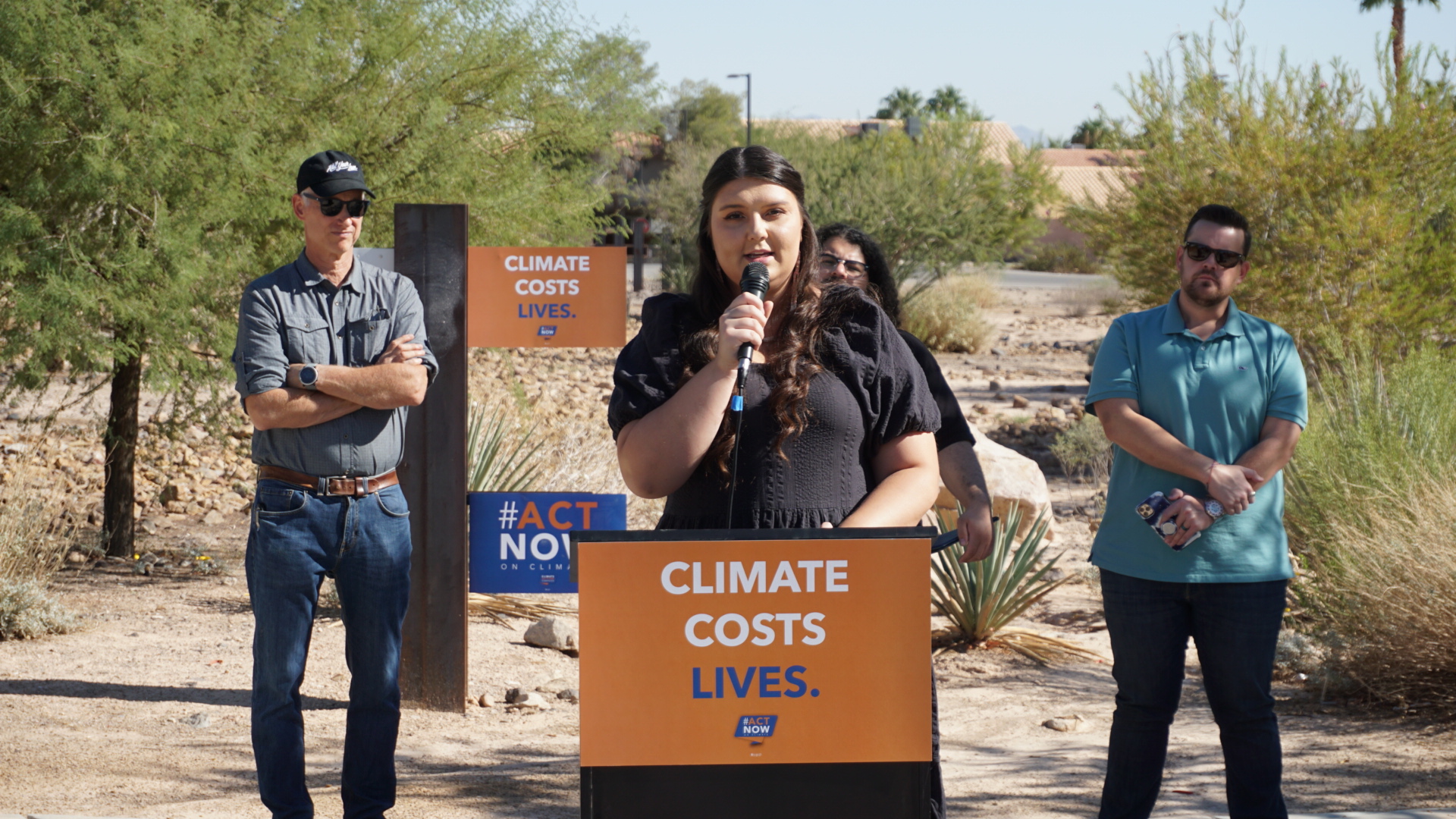 Las Vegas, NV – After the signing of the historic Inflation Reduction Act, local climate activists and environmental leaders held a press conference to highlight the work of state and federal officials to combat the climate crisis, air pollution, and drought in Southern Nevada.

Wednesday morning, Battle Born Progress was joined by partners to discuss strides in our environment led by our current leadership and candidates who stand with Nevadans on water conservation, breathable air, and sustainability.

“Nevadans are already living through climate change. Heat waves, drought, air pollution — climate change is already affecting our health, our environment and our ability to make a living wage.” said Mathilda Guerrero, Digital Manager of Battle Born Progress. “According to the BreatheFreeNV report, Nevada’s communities of color are the most impacted by the climate crisis. We don’t have time to waste. Governor Sisolak and Senator Cortez Masto have been taking this seriously with real policy action. On the other hand, Laxalt and Lombardo have no plan to address keeping our state liveable for future generations, letting themselves instead be bought and paid for by big oil and gas companies. The only way to keep moving forward with environmental justice policies to address climate change at the state and federal levels is with leaders who care more about our people and planet than Big Oil’s profit margins.”

“The IRA helps people, the planet, and the economy by also making the largest-to-date investment in a transition to clean energy,” said Andrew Sierra, Political & Organizing Director of Nevada Conservation League. “The Act will strengthen the resilience of communities to climate change impacts and leverage the ecosystems they depend on, including boosting the resilience of Tribal communities, landscapes, and fisheries from the impacts of climate change and severe drought. The historic IRA invests $4 billion to combat drought in the states bordering the Colorado River, a provision Senator Cortez Masto personally negotiated to include. Adam Laxalt would have voted AGAINST the IRA and had ‘no comment’ about the drought until he was forced to save face. In August, Gov. Sisolak toured Lake Mead and announced a new task force assigned to figure out how best to spend that $4 billion from the IRA. Joe Lombardo’s “plan” on his website makes no mention of Lake Mead, the Colorado River, or what steps he would take to ensure Nevada doesn’t run out of water – he’s unprepared for the job as governor.”

“Senator Cortez Masto specifically, serves on the Senate Indian Affairs Committee, leading on issues critical to Indigenous communities, and worked to make sure that Climate mitigation and sustainability programs specific to the Bureau of Indian Affairs within the recently passed IRA,” said Taylor Patterson, Executive Director of Native Voters Alliance of Nevada. “The act will strengthen the resilience of communities to climate change impacts and leverage the ecosystems they depend on, including boosting the resilience of Tribal communities and landscapes. This is what a Senator who fights for ALL Nevadans looks like.

Adam Laxalt’s campaign website doesn’t mention the words “Native American”, “Indigenous”, or “Tribal Nation” anywhere on his issue page, nor does it mention ‘climate’ or ‘weather’ or ‘water’ – trust us, we looked. Adam Laxalt has NO plan for Indigenous communities in Nevada or for dealing with the effects of climate change on Nevada. Here in Nevada, we also have a choice for Governor. Steve Sisolak, in his first term, has signed legislation protecting sacred Indigenous lands, including the swamp cedars, and other burial grounds. He also formally recognized and apologized for the racist, violently abusive legacy of Residential boarding schools in Nevada.

Joe Lombardo also has zero plan for Nevada’s Indigenous communities and no plan to transition Nevada to a clean energy economy. We need leaders who represent and listen to our communities, not someone who ignores them and won’t even pay lip service.”

Adam Laxalt is in the pocket of Big Oil and would have voted against the IRA, despite his phony complaining about high gas prices,” said Jarrett Clark, Communications Director of For Our Future NV. “The solution is a clean energy economy, which Sen. Cortez Masto supports, and has fought for in Congress. She’s worked to ensure the ultra-rich pay what they owe in taxes and has called out these companies for raising prices artificially. Adam Laxalt, Joe Lombardo, and the Republicans seeking to unseat our Southern Nevada delegation say we have to “unleash American energy” to solve the spiking prices of volatile fossil fuels. How convenient that their solution is to give more government handouts to oil and gas companies in hopes that it will convince them to drill and produce more harmful, dirty energy. What they don’t mention is that “unleashing” this American energy comes at the expense of our beautiful landscapes, like Nevada’s Ruby Mountains, which Senator Cortez Masto has kept Big Oil and Gas from polluting with exploratory wells. Here’s the truth. Clean energy is the ONLY pathway to energy independence. Steve Sisolak has been marshaling state resources in the fight against climate change, signing bills to increase Nevada’s renewable energy portfolio standard, address vehicle smog, and create new, good-paying jobs building out our infrastructure for the future.

Lombardo has put forward no plan for energy independence, mitigating climate change, or supporting the transition to renewable energy.”

“Taking on climate change is about far more than investing in clean energy and cutting pollution, it is also about investing in the future of our families,” said Angel Lazcano, Environmental Justice Organizer with Somos PAC. “When we take on climate change, we lower the cost of living, putting more money back in the pockets of working families and providing our communities with more economic opportunities so we can all thrive. We need leaders like Sen. Catherine Cortez Masto and Governor Steve Sisolak who understand this in their minds, in their hearts and in their policy-making. Candidates like Adam Laxalt and Joe Lombardo just don’t get it at all and it shows.”