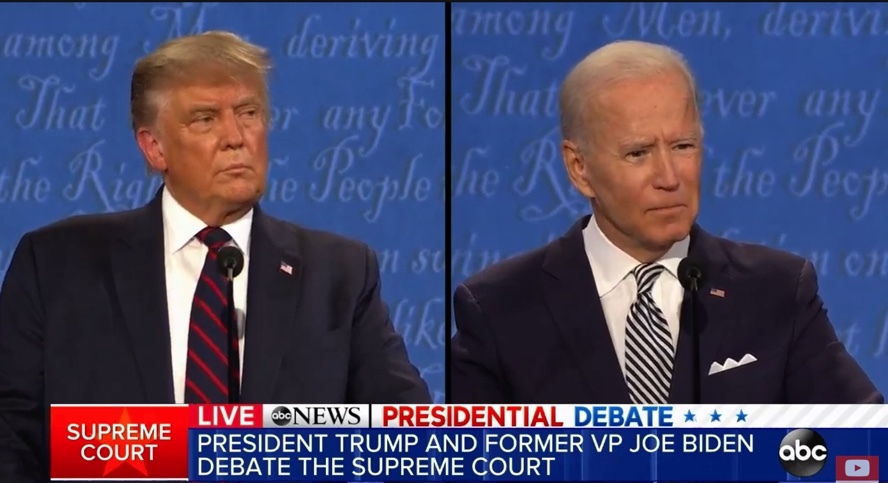 Posted at 03:04h in News by Will Pregman
0 Likes
Share

“This president is an embarrassment and we should be ashamed as a country. Tonight’s debate performance from President Trump was disgusting and laden with disinformation, falsehoods, and evasions in an attempt to provide cover for his disastrous record, which for four years, has resulted in nothing but chaos, division, and, in at least 200,000 cases, unnecessary death for the American people. Meanwhile, Vice President Biden stood strong against a flurry of baseless attacks and red-herrings to present a vision of inclusion, professionalism, and respite for working families struggling with the ongoing COVID-19 pandemic. Trump’s unhinged ranting and incessant interruptions put his immaturity, lack of competence and bullying on full display for the American people.”

“Trump seeks to disgrace the legacy of Justice Ruth Bader Ginsburg by rushing to fill her seat on the Supreme Court in defiance of her final wishes. This not only speaks to the disrespect for what Ginsburg stood for, but the hypocrisy of himself and Senate Majority Leader Mitch McConnell in trying to fill a Supreme Court vacancy during an election year.

“Despite frantic assurances by Trump that he has a plan for protecting people with pre-existing conditions and lowering costs of prescription drugs he, in reality, has no plan and has actively worked throughout his administration to destroy healthcare access for millions, even during a pandemic. This includes championing the lawsuit to repeal the Affordable Care Act all the way to the Supreme Court, where he hopes his newly hand-picked replacement for Justice Ginsburg, Judge Amy Coney Barrett, will cast the decisive vote to end healthcare coverage as we know it overnight for 371,000 Nevadans.”

“Nevada is suffering from the economic devastation caused by COVID-19 more than most other states. Las Vegas tops the list of cities most affected by high unemployment, and our state and local governments are desperate for relief in order to keep essential services afloat. Trump had no answer for why he and McConnell continue to sit idly by as Nevadans go without the relief they need, and our state has been forced to make deep cuts to healthcare and education to balance the budget. As Biden pointed out, Trump was caught on tape admitting to downplaying the virus and failing to prepare any sort of coordinated strategy to contain the spread.

“We knew Trump was hiding something in how fervently he has fought to keep his tax returns hidden from the American people. As it turns out, the average family of four earning $60,000 a year pays more than twice the annual income taxes that this supposed-billionaire president has paid in the past decade. It’s revealing on so many levels that Trump’s cultivated image of a successful businessman all gives way to the reality of his multiple failed business ventures. All the while, he pushes for more tax cuts for the wealthy that his wealthy peers can enjoy while working families shoulder the tax burden.”

“In response to a nationwide uprising against police killings of Black and Brown people, Trump has only stoked hatred and division and offered no credible solutions to criminal justice issues whatsoever. Tonight’s “law and order” canard only served only to paper over his own encouragement of violent behavior and lack of condemnation for accused white supremacist murderers. The latter of which he told to “stand by” rather than call out the insidiousness of their violent, genocidal agenda. He yet again has refused to condemn white supremacy head on.”

“Even as northern Nevada continues to deal with hazardous air quality caused by raging wildfires on the west coast, Trump prattled on with no detailed solutions for the climate crisis and peddled more bogus arguments by climate deniers. Biden laid out plans for building and transportation electrification that pales in comparison to the gish-gallop from his opponent.”

“Trump’s unfounded conspiracy theories about mail-in voting hold no water. Even after his weak lawsuit against Nevada’s vote-by-mail system failed, he continues to spread lies about the integrity of our elections. The fact is, vote-by-mail is not new. It’s a safe, secure method of voting that will ensure no one has to choose between exercising their right to vote and their health during this ongoing pandemic. Trump’s attempts to undermine democracy, such as his administration’s sabotage of the Postal Service, are ultimately due to his lack of confidence that he can win a free and fair election. More disturbing is his failure to commit to allow all votes to be counted and a peaceful transition should he lose. Biden made this commitment, even in the face of Trump’s horrific threats of chaos.”