By failing to vote for legislation to have mining pay its fair share, Republicans showed Nevada whom they really represent 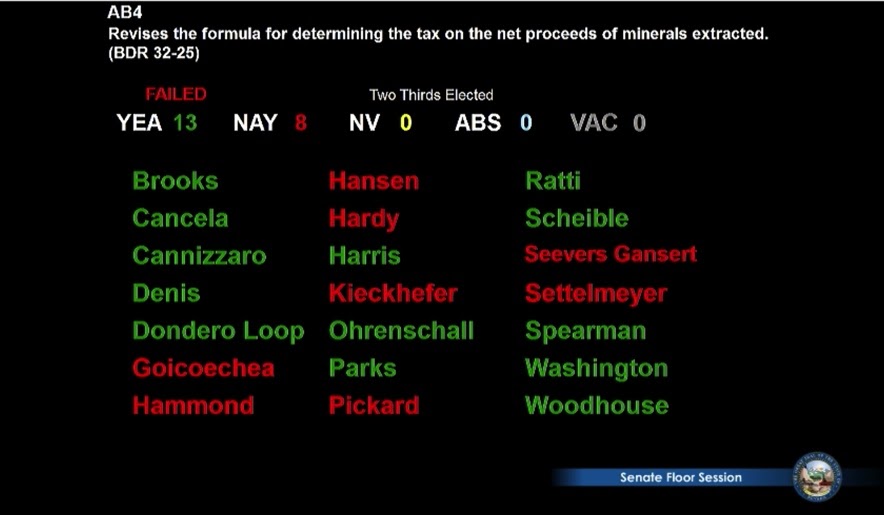 LAS VEGAS, NV –  On July 17, 2020, the Nevada Senate took up Assembly Bill 4 as part of the Special Session to address Nevada’s budget shortfall. The bill failed with a party-line vote, 13 to 8.

“Early this morning, GOP members of the Nevada Legislature showed who they work for. Not regular Nevadans. Not working families. Not small businesses. They work for corporations, especially the mining industry. With their votes against making mining corporations pay their share, they showed us they do not care for those Nevadans struggling during these hard times and would rather balance our budget on the backs of hardworking Nevadans. The GOP members voted against the people of Nevada tonight and they should be ashamed of themselves.

For the last 9 days, multitudes of Nevadans from all over this state have been BEGGING for legislators to find revenue so that working Nevadans and families aren’t the ones bearing the brunt of the budget cuts that are being made. And thankfully, Assembly Speaker Jason Frierson, Senate Majority Leader Nicole Cannizzaro, and the rest of the Democrats in the Legislature answered the call to be bold for Nevada by introducing and voting for AB4. This is a great first step that Republicans in both chambers failed to be a part of and thus have once again failed Nevadans.

Assemblywoman Peggy Pierce was a fierce advocate for justice and was one of the women that I have always looked up to the most, and introducing a bill based on her language is the bold legislation we expect to see from ALL of our elected officials. It is absolute nonsense to hear members of the legislature say they didn’t know a bill like this was coming or that it singles out one industry who has NEVER paid their fair share. People have been calling into both chambers for the past week and a half talking about this very issue. Nevadans have been asking for this for decades. As a native Nevadan, I have seen cuts over and over and I am tired of seeing cuts with no revenue efforts to provide the relief Nevadans need.

We heard the testimony from crying mothers who are struggling, educators literally begging for help, and doctors and healthcare professionals worried about the health and wellbeing of our entire state… all of them telling legislators exactly how they will suffer if we do not find revenue to fill this shortfall. While many industries are struggling in the midst of the pandemic, mining companies have not felt the economic hardships that have hit our state and they MUST do right by those suffering Nevadans.

This should be a non-partisan issue but clearly Republicans do not care about our working families. This bill would have been a start to give Nevadans the much-needed relief during these difficult times. Mining must pay for what they extract from our state – our lands and we will continue to fight for that. We should not have to beg the people we elect to do the right thing and we will continue to hold our elected officials accountable until mining pays its fair share.”