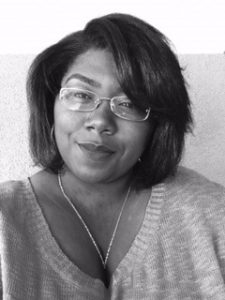 We all know that gun violence is a real and serious issue in the states in this day and age. Our televisions are constantly filled with tragic stories of people dying from gun violence and witnessing a system that seems to favor the criminals rather than the victims. Recently, I visited Chicago, IL with other organizers that more-than-believed that something had to be done about extreme conditions in this country regarding our gun laws and criminal justice reformation because the state that our current system is in today only spews isolation of people by different area codes, race, sex, religion, and sexual preference. The #Fight4aFuture summit that was hosted by Generation Progress at the beginning of April has ultimately created plans and strategies to tackle gun violence and criminal injustice here in America by gathering together with other organizers from different states that are dedicated to creating whatever they need to (whether that be a non-profit organization to help with neighborhood violence or something that would give people more than just awareness) lower the number of gun violence deaths. According to the Center for American Progress, there are more than 33,000 gun deaths and more than 84,000 nonfatal shooting occurring in the United States each year. I don’t know about other people, but all I see is that number increasing by the end of this year unless there is a tactical and strategic plan taken to circumvent this issue.

My first thought about going all the way to Chicago, IL from Las Vegas, NV blew my mind. I can even say that I was in the wrong mindset before I arrived at the summit. Of course, I knew that I’d be learning about the ways on how to prevent gun violence, but I did not know how surreal and intense the discussions would be in order for people to wake up and realize that gun violence in the country is real, it’s here, and are taking people’s lives everyday. The diversity at this summit (including white, black, Latino, Asian, women, men, gay, transgender) made me realize that although we all come from different walks in life, with different experiences, and come from different locations, this issue is not being fought alone, but that all of us were there to fight it together. Everyone brought knowledge and wisdom which not only educated me because, after all, I’m from Vegas and I can honestly say that I don’t see as half as many things as the southern and eastern states do, but it broadened my horizons. The issues that are on the east region of this country hit deeper than they do here in small but expanding Vegas. Initially, I couldn’t even grasp how much actual gun violence goes on in the eastern and southern parts of America, but with people gathered there to share their personal experiences with us, ignorance was not an option. Now, of course, I am not negating the fact that the number of deaths in Nevada that were caused by gun violence has been increasing in the past year or so. I am merely saying, that the Eastern and Southern states have already been seeing high number of deaths in the recent years.

Criminal justice reform was the central and in my opinion the most important topic that was talked about at the summit because not one issue (gun violence, in particular) evades the realm of criminal justice. It is known to most of us that most of the gun violence and areas where criminal reformation is most needed occurs is in the minority neighborhoods and more than often occurs between the youth (whether they are African American, Latino, or a part of the LGBTQ community) and police officers. An organizer named Norma Jimenez from an organization in Arizona called The Center for Neighborhood Leadership (AZCNL) spoke about the isolation of the police department from Latino and African American communities. The environment in Arizona is a unique one. The “legalization” of racial profiling has created an environment where the citizens of these communities avoid contacting the police department, even in dire situations, because of the fear of deportation or incarceration (S.B. 1070) which has left them to believe that they have no one to turn to for any help. I mean, why is getting help from the people that are supposed to protect our neighborhoods doing the very opposite? Without an answer to this question, this in turn has impacted these communities more than expected as Norma mentioned “disappearing communities.” This is taken literally. The community that Latinos live in are starting to disappear. Parks are being closed, communities are being over policed, domestic violence occurring more often, the elderly are being mistreated, and the rate of homelessness is increasing. There are more police in the community than there are people who live there. Some people may in retrospect believe that it is merely because of crime in neighborhoods, but studies have shown that over policing creates more of a problem then it does solving one. Keep in mind that community policing and over-policing are two separate entities are completely different. 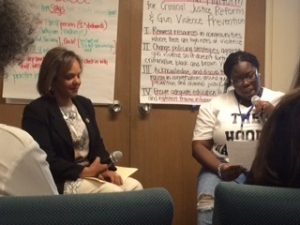 In addition to Norma’s perspective, Deputy Chief Melron Kelly was there to also confirm that there was a needed reformation of the criminal justice system, especially because of the separation between the youth and police officers. Deputy Kelly argued that a relationship between police officers and people within the community are more than essential to the cause because trust is absent. So, when he reached his position, he fired the whole police department and hired all new staff. Deputy Kelly has started the walk towards rebuilding the gap between the police force and the people in the communities, specifically the youth. Over-policing is out of the question because, according to the Deputy, over-policing was the worst decision made. He is dedicated to teaching his police force the meaning of humbleness, transparency, and developing a true relationship between the community and the police force. People such as Pat Collier (serves as the Director of Government of Affairs at The Center for American Progress) are also dedicated to criminal justice reformation by tackling the issue of prisoning and sentencing large numbers of the minority community. He introduced the 2nd Chance Act which would allow the records of prisoners that served their time to sealing their records. This is to avoid the issue of people going back to committing the same crimes after being released due to the inability of getting a job because of their record.

This summit overall provided us all a chance to speak and bring ideas to the table to help our communities with what it seems to be an ever-going cycle of violence. Some people may not all agree with certain ideas and statement brought up, but the point of the summit was to come together to weed out the ideas that would work and the ideas that wouldn’t. After all, we’re a part of these communities as well and we want to see it flourish, too. In turn, the summit has sparked some inspiration of action in me to do something about gun violence prevention and criminal justice reformation. Kids today have a serious issue with staying busy and getting bored more often. A lot of kids I have decided to get kids in the community to do something positive. If their time is being occupied with doing things positively, but in a fun manner, they are less likely to turn to criminal activity in which would deter them from using guns. So, I have taken the responsibility to help our communities and our kids.