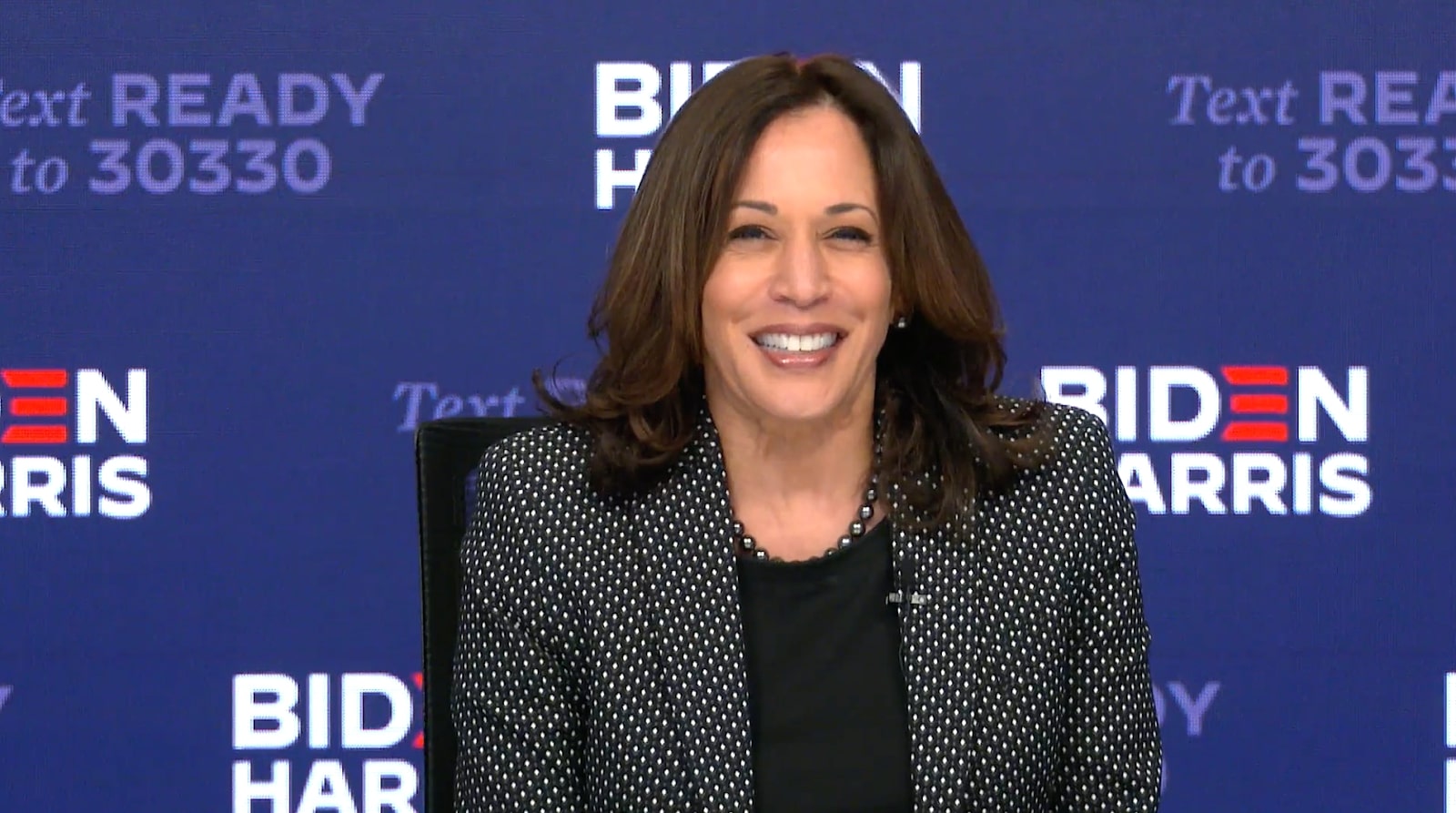 Posted at 19:22h in News by Will Pregman
0 Likes
Share

Vice Presidential nominee and United States Senator Kamala Harris delivered remarks during the event. The full recording of the entire event can be found HERE.

“Tonight we honored some fantastic Nevadans that have worked incredibly hard to move our state forward over the past year. Each honoree is a vital part of Nevada’s progressive community and we are proud to lift up their achievements from the safety of our homes during this ongoing pandemic. Congratulations to Senator Catherine Cortez Masto, Michael Lyle, Leslie Turner, Jeana Blackman Taylor, Donna West, Legal Aid Center of Southern Nevada, KALIFANO owners, Ashraf and Fahima Khalaf, and our dear friend we miss so much, Regent Sam Lieberman. Tonight’s event is a chance to celebrate these individuals and the work of our organization one last time before we all gear up for the upcoming general election.”

“We are also privileged to welcome Senator, and vice presidential nominee, Kamala Harris to Celebrate Progress with us here in Nevada once again. From her first time joining us in a packed restaurant in Carson City, we knew she was incredibly gifted and ready to fight for the progressive values we strive for here in Nevada. Now, over a year and half later, and with so much more at stake in November than there was before, we thank her for bringing that same spirit, confidence, and eloquence to the fight against the likes of Donald Trump and Mitch McConnell, and for joining us virtually tonight.”

“Greetings Nevada and congratulations to everyone at Battle Born Progress for all of the incredible work you are doing to move Nevada forward. Joe and I are so thankful for what you’re doing to empower and engage and mobilize Nevada voters…. When Joe asked me to join his ticket, saying ‘yes’ was the easiest decision I’ve ever made. Because I know what you know: that our country can do better than this. That we must do better than this. And that we are better than this. And I don’t need to tell you what is on the line in this race. Donald Trump reminds us every day of who he is and how much worse it can get with a second term in office.”

“And now, with the passing of Justice Ginsburg, we’ve lost a titan. She was a defender of justice in our country and a legal mind for the ages. Even as we focus on the life that she led and process our grief, her legacy and the future of the Court, to which she dedicated so much, cannot disappear from our effort to honor her. In some of her final moments with her family, she shared her fervent wish, to ‘not be replaced until a new President is installed.’ As Vice President Biden said this week, ‘as a nation, we should heed her final call to us. Not as a personal service to her, but as a service to the country at a crossroads.’”

“The loss of Justice Ginsburg is another reminder that we’re in the thick of the most important election of our lifetimes. And I know that usually sounds like hyperbole, but this time, we’re truly fighting for the soul of our nation. We’re in the midst of a deadly pandemic, an economic crisis, a reckoning on race and justice, and climate change, which has battered our coastlines with storms and set the west on fire. And we have a president who refuses to do his job, who stokes chaos and division, and who purposely lied to the American people about the threat of the coronavirus.”

“Americans deserve leadership that unites us. Leadership that would work together to heal our racial divides and root out injustice in our communities. And that leader is Joe Biden. Joe and I are ready to serve YOU, the people. We will restore honest leadership and implement a plan to get this pandemic under control. Our economic plan is built around working people, small businesses, and those who have been hit the hardest. Joe and I will work to expand access to quality and affordable healthcare and lower costs for everyone. We know that we are a nation of immigrants and that the American dream is for all of us, no matter what you look like, where you’re from, how much money you make, or the language your grandmother speaks. We will create a pathway to citizenship. Joe and I will work to root out the systemic racism that still permeates in our courtrooms, our prisons, and in policing. The bottom line is, together, Battle Born Progress, we will win this race. Joe and I will build back better and we will unite our country again. So thank you for everything you are doing to move Nevada and our country forward. There’s so much at stake in this election and we don’t have a moment to waste. And our country, well, it’s worth fighting for.”

United States Senator, Catherine Cortez Masto accepted the 2020 Progressive Leader of the Year Award. Cortez Masto is the first woman from Nevada and the first Latina ever elected to the U.S. Senate. Cortez Masto has been a champion for working Nevadans in Washington, D.C., by fighting to protect Nevadans’ access to health care; defend Dreamers so they can continue to live in the only country they’ve ever called home; and grow Nevada’s innovation and renewable energy economy, while also prioritizing workers and union families.

The Progressive Legacy Award was given posthumously to Regent Sam Lieberman. A friend to all Nevadans, Sam was known for his energy, devotion, humor, and spirit. A higher education champion and an advocate for equality, Lieberman was a tireless political figure in Nevada for more than 30 years, Sam served as chair of the Nevada State Democratic Party from 2008-2011. Sam served on numerous boards, including Battle Born Progress where he was Board Chair, NevadaPEP, and the Alzheimer’s Association; and was President of Congregation P’nai Tikvah. In 2014, Sam was elected a member of the Nevada System of Higher Education (NSHE) Board of Regents and served tirelessly until his unexpected death on April 3, 2020.

Michael Lyle, Las Vegas journalist, was named as the 2020 Voice of Reason. Lyle is an award-winning journalist with Nevada Current and has been a journalist in Southern Nevada since 2010. While he covers a range of topics, Lyle gravitates toward stories about human rights issues such as homelessness and housing disparities, the effects of the criminal justice system and disenfranchised communities.

The Rising Progressive Leader Award was given to Leslie Turner. Turner is the Justice Director at the Progressive Leadership Alliance of Nevada (PLAN) and leads the organization’s Mass Liberation Project where she applies her focus and passion to ending mass incarceration and the school-to-prison pipeline. Prior to joining PLAN, Leslie worked in a local juvenile detention center, assisting young people and their families break free from the cycles of incarceration.

The Progressive Activist Award was given to Donna West and Jeana Blackman Taylor. In 2020, West joined Blackman Taylor and Annette Magnus to form the Las Vegas Community Pantry – a grassroots Las Vegas effort to provide Las Vegans with food, water, and essentials during quarantine.

West has been an active volunteer with organizations who partner with the Democratic Party such as Planned Parenthood, NARAL, Nevada Conservation League, and Battle Born Progress. In 2017, West was elected as Chair of the Clark County Democratic Party.

In 2016, Blackman Taylor founded Everyday People Taking Action, a group designed to learn more about issues facing our local government and how to get involved. EPTA’s annual spaghetti dinner has funded 37 projects for Las Vegas schools through Donors Choose. She is a cast member of KÀ by Cirque du Soleil at the MGM Grand.

Legal Aid Center of Southern Nevada (Legal Aid Center) received the Community Partner of the Year Award for their work keeping Nevadans in their homes during the COVID-19 pandemic.  When COVID-19 hit, Legal Aid Center quickly transformed their delivery of services from in-person to virtual to continue assisting low-income individuals and families in the community. The number of requests Legal Aid Center received skyrocketed for help with evictions, temporary protective orders and other legal issues. Legal Aid Center also works tirelessly on policy changes including the eviction moratorium extension and Senate Bill 1 from the 2nd special session which will result in an eviction mediation program that provides an alternative means for landlords and tenants to resolve their dispute while avoiding the need to go to court.

KALIFANO owners, Ashraf and Fahima Khalaf, accepted the Progressive Business of the Year Award. KALIFANO offers an eclectic selection of high-end fossils, minerals, crystals and recycled metal art. Ashraf and Fahima Khalaf run the business with their four children, RJ, Rami, Mohammad-Judeh and Jannah. A small-business based in Las Vegas for over 20 years, KALIFANO is proud to support organizations that work to improve the lives of Nevadans through justice, equality, and the spirit of the American dream.