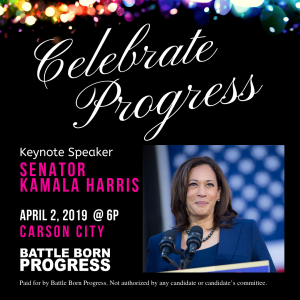 U.S. Senator Kamala Harris is scheduled to deliver the keynote address. Senator Harris has worked on progressive policy since first elected as the second African American woman in Congress. As U.S. Senator, Harris has worked to forward legislation to provide sweeping tax cuts for the middle class, address the high cost of rent, raise the minimum wage to $15 an hour, make higher education tuition-free for the vast majority of Americans, reform the cash bail system, protect the legal rights of refugees and immigrants, and expand access to affordable, quality health care with Medicare for All.

Nevada State Senator Julia Ratti will receive the Progressive Leader of the Year Award. Throughout her career Senator Ratti has dedicated herself to bettering both her local community and the State of Nevada. From investing time and energy in Northern Nevada’s youth to serving on the Sparks City Council, the Senator has demonstrated a tireless dedication the Silver State. She now serves all Nevadans as a State Senator.

Emily Reese, a well-loved Northern Nevada activist and organizer, will be posthumously awarded the Progressive Legacy Award. The award is scheduled to be accepted by her mother-in-law, Virginia Reese. Emily, who passed away last year after battling cancer for 9 years, used her fight with cancer to advocate for better healthcare and insurance options.

Anjeanette Damon, Government Watchdog Reporter for the Reno Gazette Journal, will be named as the 2019 Progressive Voice of Reason. Her work and dedication to her craft is an example of long-standing journalistic excellence.

Denise López will be awarded the Rising Progressive Leader Award. As the former Executive Director of the Democratic Party in Washoe County and now the State Director at Faith In Action, López puts the needs of her community first and is dedicated to making progressive change in Nevada.

Washoe Education Association will receive the Community Partner of the Year Award. WEA, under the leadership of Natha Anderson, empowers educators to fight for their students both inside and outside the classroom. WEA is a key partner working actively with Battle Born Progress during legislative session to ensure decision makers know where educators stand on proposed policies.

What: Biennial celebration to recognize the unstoppable work of progressive leaders, advocates, and organizations in Northern Nevada. More can be found on our website.