28 Sep Kavanaugh Nomination Stalled but Where are Heller and Laxalt? 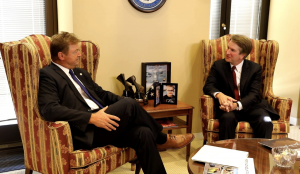 NEVADA –  Today, Judge Kavanaugh’s confirmation to the Supreme Court seems to be grinding to a halt after Republican leaders, including Governor Sandoval and President Trump, came out in support of delaying a full vote by the U.S. Senate as an investigation into rape and assault allegations is set to begin.

Earlier today, Governor Sandoval declared his support for a full investigation prior to a Senate vote. Arizona Senator Jeff Flake voted conditionally to move the Kavanaugh confirmation vote to the Senate floor only if the vote is delayed a week and the FBI conducts an investigation. Sandoval and Flake join a chorus of bipartisan leaders who believe Kavanaugh needs to be fully investigated before a Senate vote or his nomination withdrawn. Trump also announced his change of heart and belief that Dr. Blasey Ford’s testimony was compelling and expressed his will for the Senate to do what they feel is right.

Unsurprisingly, one key Nevada voice is missing from this chorus. Last heard, Senator Dean Heller moved from 100% support for Kavanaugh to a cowardly quiet. Also missing is Nevada Attorney General Adam Laxalt, who has not spoken since late July when he expressed he “wholeheartedly supported” Kavanaugh. This leads us to wonder what side will Heller and Laxalt take now?

Today, Nevadans also gathered in front of Senator Heller’s office to protest his silence. You can watch these livestream videos to learn more. Click here for more videos of the event.

“This feels like deja vu. Once again, we are thanking Governor Sandoval for his leadership, while condemning Senator Heller and Attorney General Laxalt for their silence. Last year, Heller turned his back on Sandoval and the rest of Nevada when he made his mind up and voted to strip Nevadans of their healthcare to prove his devotion to Trump. A year later, we wait to see if Heller will follow Sandoval’s lead. Even Trump has left Heller behind, but Heller is silent on where he now falls on Kavanaugh. Heller is previously quoted saying he believes the sexual assault allegations are a ‘little hiccup,’ and made a bet for $100 that Kavanaugh will get confirmed. After this vote delay and new FBI investigation, Heller will likely be down $100, his morals, and a Senate seat.

Another quiet Nevada GOP leader, Adam Laxalt, has yet to retract his support for Kavanaugh. The absence of any statement makes Heller and Laxalt complacent and supportive of an assumed rapist. I ask them both, does Kavanaugh still have your 100% support?”

“Governor Sandoval has called for a full investigation of Dr. Ford’s allegations of sexual assault against Brett Kavanaugh before a full vote in the Senate, but Senator Heller said shamelessly he believes these serious allegations are a “hiccup.” Senator Heller’s reaction is not only offensive, it shows that he is more concerned with doing the bidding of the moneyed special interest groups behind Kavanaugh’s nomination than ensuring the American people get a Justice on the court who will protect the rights and freedoms of all working people.”

“Our community expects our leaders to do what is right: speak up and protect Asian Pacific Islander women, who face significant barriers that threaten agency over their bodies and lives. Governor Sandoval has called for a full review. Attorney General Laxalt and Senator Heller must do the same and prove that Asian Pacific Islander Nevadans’ voices matter.”

“Senator Heller does not stand up for women.  Time and time again he has been asked to take the tough votes to protect our care, to keep Planned Parenthood funded, to stand up against violence towards women, to stand up for families being separated. Each time, Heller has let Nevada’s women down. It is profoundly irresponsible for Senators to advance this nomination. Just today, our Republican Governor Sandoval, said the Senate should not cast a final vote without a full review of the allegations of sexual misconduct that have been made against Brett Kavanaugh. But Dean Heller, apart from having referred to these allegations as a ‘hiccup’ and expressing his support for Kavanaugh had remained silent.  Senators, including Dean Heller, have ignored the voice of a sexual assault survivor, and voted to support placing Brett Kavanaugh in a position to judge women’s health and rights on the highest court of the land. Early voting starts in just 22 days and Nevada’s women are mobilized vote him out of office so he never stands in the way of progress again.”

“Today would have been a good day for Senator Dean Heller to show up for Nevada women in Kavanaugh’s confirmation process to the Supreme Court, but he failed them. Both Governor Sandoval and Donald Trump have both, in different ways, held back from fully supporting Brett Kavanaugh’s nomination to the highest court in the land, and after listening to Dr. Ford’s heart-wrenching testimony, it only seems right. If Senator Heller votes to confirm Brett Kavanaugh to the Supreme Court, he will be sending a strong message to sexual assault survivors in Nevada that their assault doesn’t matter. This is about the future of Nevada and the future of our country, and Senator Heller needs to decide whether he represents Nevadans or his DC special interests.”

“We say to our Senator Dean Heller who seems incapable of making a principled decision on his own:

This is no longer just about Judge Kavanaugh’s partisan legal decisions or even about the sexual assault allegations. Yesterday Kavanaugh proved he is not temperamentally fit to sit in judgment of others. His unseemly rage and vitriol were Exhibit A as to why we need a more extensive investigation at the very least. Moreover, he showed us what to expect if he ascends to the Supreme Court: he will be incapable of objectively rendering thoughtful decisions that are fair for all Americans, not just for those who share his views. That may be what Sen. Heller wants, but it is not what Nevadans want. We will not forget how he votes.

“Senator Heller’s statement following yesterday’s hearing made clear that he will side with Republicans and President Trump to move Kavanaugh’s nomination forward despite the “hiccup.” Senator Heller’s and the Republican caucus’ attempt to rush the process without a full and fair investigation of the claims show that they believe women’s voices do not matter. Dr. Ford and Nevadans deserve better than a sham hearing. If Senator Heller votes to confirm Kavanaugh, young people across Nevada will send a clear message to him that his record will not be tolerated in our state by taking the fight to the ballot box.”

We believe courageous survivors like Dr. Christine Blasey Ford. We do not believe liars and abusers like Brett Kavanaugh. On the grounds of his extreme right-wing beliefs and his belligerent behavior at this week’s hearing, Kavanaugh is not qualified to serve on the Supreme Court. We are well past the point of expecting Dean Heller to stand with Nevada women, or even our own governor. Heller turned his back on Nevadans in favor of the Trump agenda. In November, voters should return the favor.