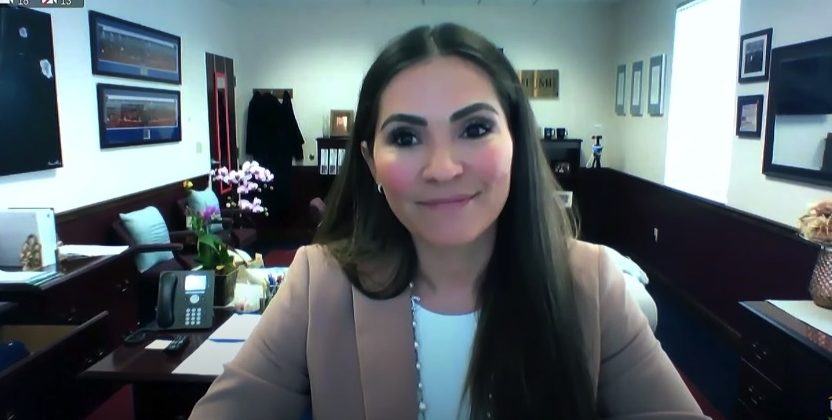 CARSON CITY, NV –  This morning, Assemblywoman Sandra Jauregui presented AB286 to the Nevada Assembly Judiciary Committee, joined by representatives of Nevada’s business community and gun safety advocates and organizations (Find a recording of the hearing here). The bill prohibits the sale and transfer of unfinished, unregulated, and unserialized firearm components (a.k.a. “ghost guns”), and gives businesses the ability to voluntarily prohibit firearms on their premises.

“In a post-COVID world, we must show visitors and residents alike that Nevada is a place where you can forget about your problems, not come to find more. We need to ensure safety is a selling point in order to get our tourism economy back on track. I want to thank everyone who has worked hard over the last three years to make this bill a reality. I believe it is a good piece of legislation that incorporates many compromises. Still, I am willing to work with interested parties to improve the intent and effectiveness of the bill. However, I will not sacrifice the safety of every visitor and every other convention for the convenience of one. AB 286 won’t stop every act of gun violence.

No other law stops every harmful act from occurring. If it did, we could all just go home. The point of all of these measures is to stop more incidents, save more lives, and it will help our law enforcement take guns out of the hands of people who could do harm. It will help the largest driver of our state’s economic recovery be safe for the over 40 million tourists a year who visit us and workers who make their experiences unforgettable each day.”

“We were proud to testify this morning in support of AB286, alongside gun violence prevention champion Assemblywoman Sandra Jauregui. We continue to admire her courage and leadership when it comes to keeping Nevada’s communities safe from gun violence. This legislation contains an important provision to allow businesses to determine for themselves whether or not firearms belong on their premises, and empowers them to prohibit firearms if they deem it necessary. Businesses both large and small can enforce the rules they determine to quell threats and harm from gun violence on their property.”

“Moreover, this bill will stop the proliferation of ghost guns, a troubling new trend amongst violent extremists and those who seek to skirt other gun safety laws. Assembling unfinished gun parts, without serial numbers, allows for untraceable, deadly weapons to end up in the hands of those who shouldn’t have access to them. AB286 will end this shady practice and make our state safer. We look forward to the Committee moving this bill and encourage the Nevada Assembly to vote in favor.”

“Ghost guns are an existential threat to public safety. They are untraceable and unregulated, undermining almost all existing, common-sense regulations on the books to keep firearms out of the hands of those who should not have them. Assemblywoman Jauregui is right to champion a fix to this growing problem. The people of Nevada have time and again sought common-sense solutions to prevent gun violence and Assemblywoman Jauregui’s bill would do just that. Brady is grateful for her leadership on this growing and concerning issue.”

“Nevada has been the site of both tremendous tragedy and significant progress when it comes to gun violence. AB286 will continue to build on this progress and address two significant gaps in state law that continues to leave Nevada communities vulnerable to gun violence. By banning ghost guns and giving local businesses the freedom to be able to control whether guns may be brought onto their premises, this bill is narrowly tailored to address specific public safety concerns and is well within the scope of permissible constitutional regulation of firearms as articulated by the Supreme Court.”

“Ghost guns are a clear threat to public safety. With no federal restrictions on who can buy ghost gun kits or parts, these firearms can be assembled in a garage or basement by anyone. Even worse, they are built to be untraceable. This legislation takes a necessary step toward addressing these firearms to protect Nevadans.

“At the same time, it goes further toward helping communities by allowing hotels, religious sites, parking garages and other properties to prohibit carrying firearms on their properties. Nevada will empower businesses to do more to protect its citizens from the gun violence epidemic that has plagued Las Vegas. There is much more to be done in our fight to end gun violence, but AB 286 would be a tremendous step forward to protect Nevadans. We thank Assemblywoman Jauregui for her leadership and urge the legislature to continue advancing the bill.”