Las Vegas Marches to the Doors in Reaction to SCOTUS Confirmation Vote - Battle Born Progress
Heller’s vote today follows a long list of times Heller has betrayed his constituents and the rest of the country. From healthcare to immigration to women’s rights, Heller has shown that he’s not for Nevadans, instead, he’s bought-and-paid-for by Trump and other extreme special interests.
Dean Heller, Brett Kavanaugh, Supreme Court, Nevada elections
16764
post-template-default,single,single-post,postid-16764,single-format-standard,ajax_fade,page_not_loaded,,qode-title-hidden,qode-child-theme-ver-1.0.0,qode-theme-ver-13.7,qode-theme-bridge,wpb-js-composer js-comp-ver-5.4.5,vc_responsive 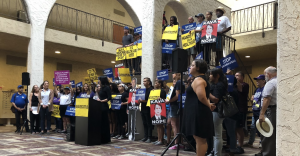 Las Vegas, NV – Following months of sustained grassroots action in opposition to Supreme Court nominee Brett Kavanaugh, marches and rallies took place nationwide on Saturday, October 6th before the final confirmation vote happens on the Senate floor. In Las Vegas, Nevadans gathered before a “march” to their neighbors’ doors, turning out voters for the upcoming election to win for Nevada’s working families.

“Today and every single day until Election Day we will make sure that Nevadans across the state, at the doors and on the phones, are talking to their neighbors to remind them of Senator Heller’s vote today for Brett Kavanaugh,” said Battle Born Progress Executive Director, Annette Magnus. “Heller’s vote today follows a long list of times Heller has betrayed his constituents and the rest of the country. From healthcare to immigration to women’s rights, Heller has shown that he’s not for Nevadans, instead, he’s bought-and-paid-for by Trump and other extreme special interests. While Heller is in his Washington D.C. bubble, we’ll be here at home, every single day, reminding Nevadans that he’s not working for us.”

“Senator Heller better remembers that WE will remember in November,” said For Nevada’s Future State Director, Michelle White. “Heller is backing a nominee in Kavanaugh against the wishes of working families. There is one place they cannot ignore us and that is at the voting booth.”

Brett Kavanaugh demonstrated his unfitness to serve on the Supreme Court during his confirmation hearings earlier this month. The nominee avoided tough questions about his record and how he would rule on critical issues such as upholding Roe v. Wade, protecting coverage for pre-existing conditions, and executive authority. Later, when Dr. Christine Blasey Ford came forward with credible sexual assault allegations against him, Kavanaugh responded last week before the Judiciary Committee with a bitter, partisan tirade that further cemented his unfitness for the highest court.

Speakers drew attention to the fact that Nevada Senator Dean Heller has consistently vocalized his support for Kavanaugh, despite Kavanaugh’s record of ruling against abortion rights, health care coverage, environmental standards, and workers’ rights. Heller dismissed Dr. Blasey Ford’s allegations as a “hiccup” in the nomination process, and, this week, went even lower by sending an email to supporters calling the FBI investigation a “witch-hunt” in a direct homage to President Trump’s rhetoric.