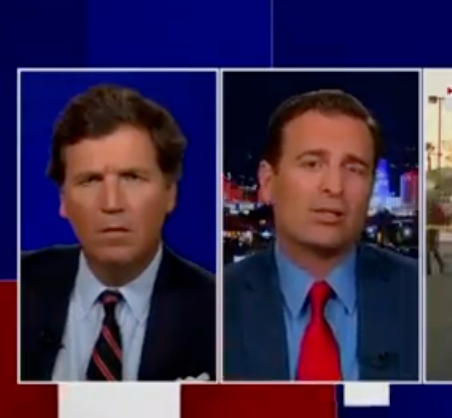 LAS VEGAS, NV – Friday evening, candidate for U.S. Senate in Nevada appeared on Tucker Carlson’s program on Fox News to comment on the murder of Las Vegas Review Journalist, Jeff German, insinuating that alleged suspect, Robert Telles, is representative of a trend of violent rhetoric from the political left.

Annette Magnus, Executive Director of Battle Born Progress, said in reaction to he segment, “The murder of Jeff German is horrifying, cruel, and tragic. We are heartbroken for his family, coworkers, friends and colleagues who are grieving at this time. This is especially true after Adam Laxalt once again sunk to a new low tonight, using this despicable crime to push lies and deflect from his own filthy laundry, saying that, ‘the left’s foot soldiers… these are the people inciting violence in our country’. In a cynical media appearance to desperately advance his own campaign for Senate, his disgusting remarks betray Laxalt’s utter lack of character and humanity.

If Robert Telles is found guilty, he’s no friend of progressives or any who support a free press and transparent government. Unlike MAGA extremists on the far right, we do not lionize or defend inexcusable criminal behavior on the basis of their political beliefs, as Laxalt did, following the Department of Justice’s execution of a warrant at the home of his political ally and former president, Donald Trump. Adam Laxalt also played an active role following the 2020 election in disseminating lies and disinformation which inspired attacks and threats to the lives of Nevada election officials and culminated in the January 6th attack on the US capitol, in which 5 people died, including capitol police officers. Adam Laxalt is also endorsed by Donald Trump, who referred to the media as, “the enemy of the people,” celebrated violence committed against members of the media, and frequently made vilifying statements about reporters and members of the press. But now, Laxalt expects us to believe him when he says, “senseless violence on journalists is not the America we can ever accept.” Apparently, it was, and still is, so long as his own preferred faction is doing it.

For Laxalt to try and claim any moral high ground or political advantage out of this situation is craven projection at best and disgusting exploitation of a tragic murder at worst. Furthermore, it’s a painfully desperate attempt to rewrite history and in hopes to instill a collective amnesia about the far right’s political zeitgeist of the past several years. We hope Nevadans at least get to see exactly what a morally bankrupt opportunist Adam Laxalt really is and remember that fact as he begs them for support in the November election.”