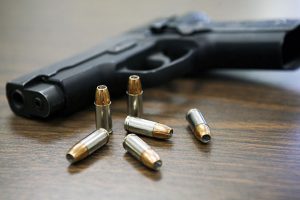 I am no stranger to death. I am no stranger to the ache of missing someone who won’t walk back through the door. I have lost my father to cancer and most recently I lost my brother to suicide. I have twice watched my dogs move on from the last stages of life to whatever lies after.

The kids in the lunchroom would freak out and say cancer was in the food, like some maggot you could avoid ingesting.

I assumed tons of people were working on that issue and it would be fixed soon. I studied all about cancer, and my aunts said I would talk about clusters in certain areas and things that they thought were way beyond my years. Cancer was the only killer.

But then I started watching the news and something changed.

During middle school, I had begun making plans for protecting myself and fellow students from a shooter. I don’t know why it hit then, but the reality was shocking. I could die if there were someone in the school who wanted kids dead. I made up scenarios and scenes of me saving the school.

I grew up with guns. My dad had one. “Hog Leg,” was the name we gave it. I still have no idea what kind it was, other than the red velvet sleeve that it was put in.

My sister and I saw Hog Leg, but I don’t remember touching it.

My dad bought my mom a gun for home protection, which she never even unwrapped. My dad had gun training for his job. He was a probation officer for 30 years in Reno. At a young age, he told me about how the Hog Leg could blow someone’s arm off if they got shot. I was taught that if you shoot, you do it to kill; which sounds barbaric.

Why would you ever want to kill someone else?

Media and the culture around guns don’t tell the whole story of the responsibility of owning a gun. Movies make guns look fun and easy to use, they say that those who get shot are the bad guys, and there aren’t all these horrible casualties that one sees in war, in life.

There is no mention that guns are one of the most used items for suicide, 6.7 out of 100,000 as stated by the CDC. They don’t mention that there is a family behind every person who dies and that we must continue regardless of what happens to them.

Some people say this is taking away a right, but I disagree.

One of the prevention options I have heard about is a wait period, which I think is lovely. One must plan ahead for a gun to go hunting. One must plan ahead to buy their child a birthday present. One must plan ahead purchase a gun. All the people I know of who want guns have wanted them for years, for hunting or just home protection. Some even just to shoot for fun. I just feel like having to wait would be amazing and the best option.

Guns are something that comes with consequences. The laws proposed aren’t anything out of the ordinary. It is a little acknowledgment that a gun is deadly and should be owned by responsible people.

I am young; shootings should feel like a natural phenomenon. America is one of the countries of the free, and the chances are supposed to flow. I don’t want my opportunities to be cut down by someone else’s decision.

It is only fair that people have a background check to purchase a gun. Guns hold power, and thus, you should have rules in place to show the importance of understanding a gun and its responsibility. We’ve had children die. We’ve had friends and family die. We’ve had strangers die.

The purpose of mourning is to provide an insight on life and the end of it, for enlightenment, warning. But if there are no actions in which to prevent the mourning, then what is the purpose of it? Loss of life means something. Let’s change the rules to owning a gun as to show each other and ourselves how precious life is.