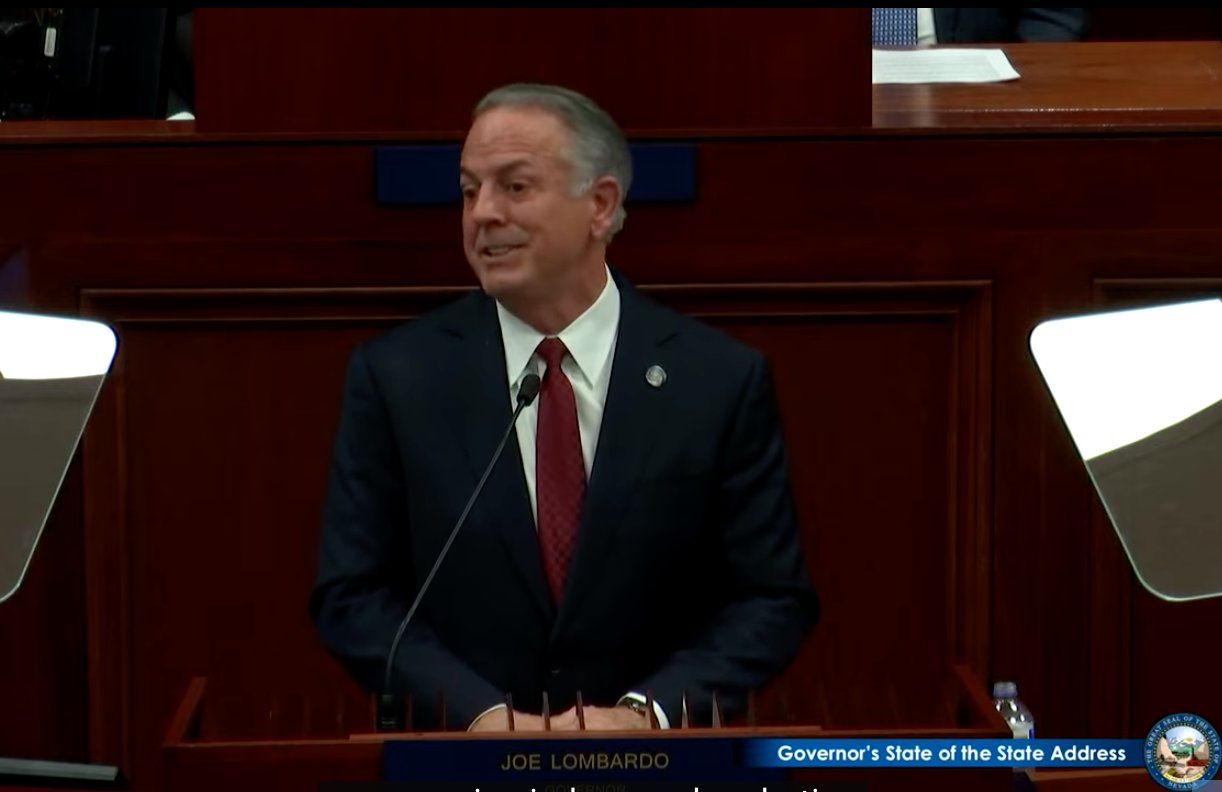 LAS VEGAS, NV – Tonight, Governor Joe Lombardo issued his first State of the State address, laying out his goals for the year ahead. This event is historically linked with the Governor’s budget proposals. The address was riddled with attacks on progress made in recent years along with a renewed attempt to bring vouchers and privatization of education to Nevada.

“Governor Lombardo’s embrace of right-wing governing tactics like tax cuts, trickle-down economics, and other economic schemes were on full display tonight. His name-drop and gleeful announcement of a new possible state business venture with disgraced billionaire Elon Musk was just icing on the cake. It is telling that Lombardo consistently touted former Governor Steve Sisolak’s accomplishments, such as the Formula 1 Racing competition, in an attempt to build excitement for an otherwise lackluster agenda and speech. Lombardo’s misguided belief in tax cuts fails to realize the negative impacts of cutting revenue for programs like housing assistance, K-12 education, and infrastructure improvements across Nevada for the long term.

It is clear Governor Lombardo will prioritize the needs of the few of his friends who have money over the needs of the many. This was apparent given Lombardo’s desire to implement vouchers that take money away from public education in favor of providing that money to private institutions, unaccountable to public scrutiny. ‘School choice’ schemes neither make education more accessible, nor does it give parents more choices. At a time when working families are already struggling with higher rent, grocery, and healthcare costs, these contrived ideas to gouge public schools of even more funding is inappropriate and unwelcome.

It’s not surprising that Lombardo made zero mention of the high cost of housing, rent, or the need for more affordable housing. This is another example of Lombardo’s dedication to his donors, like Robert Bigelow, a businessman who gave $50 million dollars to Lombardo’s gubernatorial campaign. We can also follow the money and see that since becoming Governor, Joe Lombardo’s campaign has raised nearly $2 million dollars. This surpasses former Governor Sisolak’s campaign and shows that a number of big money industries are ready to flash cash and influence the newly elected Governor Lombardo.

Further stoking the flames of culture wars concerning increasing crime, Lombardo, the former Sheriff of Clark County, should know better than to think a tough-on-crime position will solve all our woes. In fact, the Nevada Independent had to fact-check this narrative in the 2022 campaign and found that crime has not increased substantially. This narrative may rile up Lombardo’s base but it is not a reason to undermine progress on criminal justice reform from previous sessions. Our system of justice is inherently flawed and policies like Assembly Bill 236, which reduced penalties for low-level crimes, are needed. We may not be able to make massive progress forward under Governor Lombardo but we will defend policies that have worked to reduce the injustices imposed by our criminal justice system.

We will not stand by while Governor Lombardo chooses to dismantle our voting laws by pushing harmful voter ID legislation and getting rid of mail ballots. Voting is a sacred right that will not be used as a talking point to garner favor from donors or his base. Mail ballots are convenient, secure and expand the freedom to vote by providing options to eligible voters regardless of zip code. Nevada has the most secure and modern elections in the country. Conversely, voter ID laws have proven to be harmful to voter turnout and access to voting time and time again.

Tonight’s State of the State made it clear that we have our work cut out for us to ensure Governor Lombardo does not tamper with or derail the accomplishments of the past several sessions. This includes policies to make our communities safer from gun violence, the management and stewardship of our public lands, the establishment of our new public health insurance option, hard-fought reforms in the areas of voting rights and criminal justice, and finally, the keeping of public money in public schools. These issues are non-negotiable and we will hold any elected official accountable for deals cut on the backs of hard-working Nevadans and our rights.”