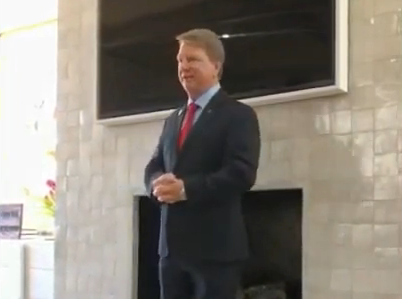 NEVADA – In a video obtained from American Bridge, Nevada candidate for Secretary of State, Jim Marchant, spoke to an event hosted by Veterans for America First in South Carolina on September 7th to talk about his campaign with the organization. During his remarks, Marchant bizarrely claims to be the fifth grandson of Confederate General, Robert E. Lee, which received cheers and applause from the audience.

This is particularly alarming, not just because South Carolina was the first state to secede from the Union and became the crucible of the Civil War, but because Nevada owes its statehood to its strategic value in the struggle against the proslavery rebels.

Marchant then goes on to make unsubstantiated claims about Nevada’s election system being compromised by a secret plot in 2004 to elect ‘progressive’ Secretaries of State around the country, including Nevada. Of course, former Republican Senator Dean Heller was Secretary of State in Nevada at that time, and had been since 1995, and was not up for election in 2004.

“It should go without saying that praising a leader from the traitorous, slave-owning Confederacy is completely disqualifying for any public official, and yet, the Nevada GOP continues to show us who they are with candidates like Jim Marchant,” said Annette Magnus, Executive Director of Battle Born Progress. “Whether this news about Marchant is true or not, the fact that he felt it would get him kudos from the crowd, and the fact that he was ultimately correct in that assumption, should be chilling for Nevada voters. Nevada is, quite literally, ‘battle born’ because it was Nevada that aided the Union during the Civil War to stop the egregious slavery-driven economy of the Confederacy, where Black slaves were treated as property by wealthy white land-owners.

So just who is Jim Marchant trying to appeal to? It certainly is not voters in Nevada, who come from a rich diversity of backgrounds, many of whom struggled against institutional racism like that of the Confederacy and the Jim Crow South to gain even a small foothold in the United States. Marchant, like his fellow MAGA travelers Joe Lombardo, Sigal Chattah, Michele Fiore, and Adam Laxalt, are seeking the support of far-right extremists, who supported the attack on the capitol on January 6th, and who support overturning the voice of Nevada voters, because their allegiance is to a far-right, authoritarian and exclusionary vision of America, not a society in which every person has a fair opportunity to succeed. That’s why Marchant, in spite of voting by mail for years, is adopting election conspiracy theories as his platform; he desperately needs a pretense to justify his ambition of increasing his own power and deciding elections for Nevada unilaterally.”