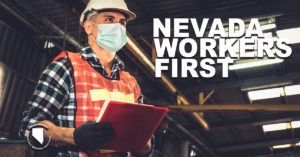 Carson City, NV – Today, additional labor groups joined the coalition to promote workers’ rights and to push back against any proposed legislation giving business immunity from liability during the coronavirus pandemic. Southern Nevada Central Labor Council, Northern Nevada Central Labor Council, and Teamsters Local 986 are joining the Nevada Workers Coalition, which is made up of several labor unions and grassroots and advocacy organizations. The coalition will be launching a campaign to ask Nevadans to call Governor Steve Sisolak’s office and urge him to stand with workers and their safety.

The mission of the Nevada Workers Coalition is to urge Governor Sisolak and Nevada’s elected leaders to put workers first instead of removing legal accountability for businesses that would not only jeopardize the health and safety of workers, but anyone who enters those workplaces. Click here to view a letter the coalition sent to Gov. Sisolak and here to view more information on immunity from liability.

“We are proud that Teamsters Local 986 and the Southern Nevada Central Labor Council have joined our coalition. Together, we are ready to work with Governor Steve Sisolak and legislative leaders in ensuring that worker safety is prioritized in any upcoming special legislative sessions. We will also monitor efforts to put corporations over workers via immunity from liability. We are prepared to hold elected officials that fail to protect Nevada’s workers accountable.”

The Nevada Workers Coalition is made up of the following organizations: