Equal Pay Day marks how long women have to work to make what a man made in 2015 alone, so it’s not a very happy day for many of us.

Women are integral to our families’ well being, the modern day workplace, and a thriving economy. And yet nationally, on average, employers pay women 79 cents to every man’s dollar. When looking at minorities, black women are paid 60 cents on the dollar compared to men and Latina women are paid 55 cents on the dollar. At this rate, women won’t get paid as much as men until the year 2059!

Specifically here in Nevada the gender gap in pay is 83 percent – narrower than the average U.S. gap of 78 percent (expected to close in 2044 at the current rate). For Hispanic women in Nevada it’s 54 percent; for African American women it’s 65 percent.

While women are taking home less money, there is no “women’s discount” on rent, electricity or anything else, which means it’s easier to fall behind, and harder to do things like pay off credit cards, get out of debt, and set aside money for unavoidable financial emergencies.

It’s time to show that a hard day’s work means a fair day’s pay regardless of your gender. 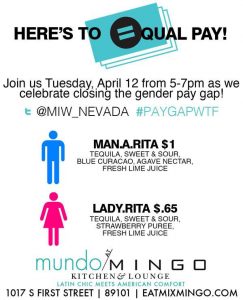 If you believe that we are long overdue for equal pay, join Make It Work Nevada tonight in Las Vegas at Mingo Kitchen & Lounge from 5 p.m. – 7 p.m., and help raise awareness on the need to close the gender pay gap.

Sign up with the Make It Work Campaign and follow Make It Work Nevada on Twitter to stay updated on this issue and how you can make a difference.