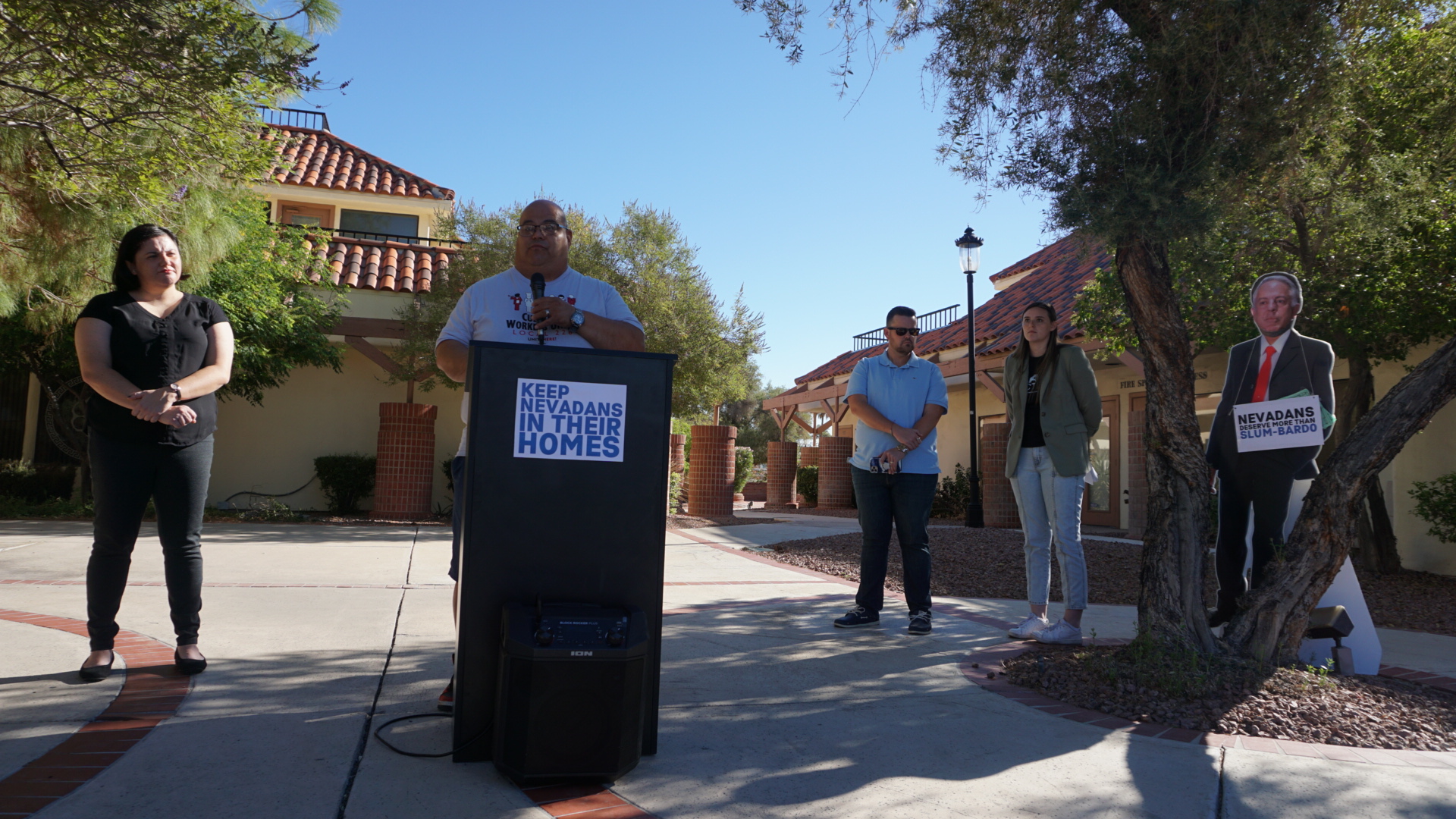 LAS VEGAS, NV – Thursday morning, advocates and members of several community organizations gathered for a press conference to contrast the approaches of 2022 Nevada gubernatorial candidates Steve Sisolak and Joe Lombardo, and explain what is at stake for renters, homeowners, the unhoused, and other vulnerable communities in Nevada’s 2022 midterm.

In the context of the upcoming 2022 gubernatorial election in Nevada, rising costs of housing is one of the top issues for Nevada voters, besides the economy overall. Polls show Nevada voters also overwhelmingly support policy initiatives aimed at lower housing and rent costs. Those speaking on Thursday morning compared the records of these two candidates, making the case that despite challenges, Sisolak has taken concrete steps and plans for addressing the housing and rent crisis, while Lombardo has simply offered platitudes with no actual solutions.

“Since the pandemic, we’ve talked to countless Nevada voters who list housing affordability as their most concerning issue,” said For Our Future Nevada State Director Gariety Pruitt. “So far, it’s clear there’s only one candidate in the race for Governor who is taking this issue seriously. Through Governor Sisolak’s innovative ‘Home Means Nevada’ initiative, $500 million is already being put to work to build and preserve more affordable housing units for Nevada’s working families. This November, Nevada voters will have the opportunity to build on the progress we’re making toward housing justice. Re-electing Governor Sisolak is our best chance at bringing down housing costs and keeping Nevada families secure in their homes.”

Carlos Padilla, baker and Culinary Union member for 29 years said, “Knocking on doors, I hear from elderly voters that they can’t afford their high rent anymore because of their fixed income. They are in danger of being out in the streets. My rent went up $400 last time I renewed my lease. We need Neighborhood Stability so we can afford to pay our rent. Governor Steve Sisolak supports Neighborhood Stability and I will be voting for him this November. We vote. We Win!”

“Overwhelmingly, we have heard that Nevada families are struggling in this housing crisis spurred by greedy corporate landlords,” said Cassie Charles, Campaign Director for PLAN Action. “Each day we hear that Nevadans are concerned about keeping food on their table and meeting the growing demands of raising rent and housing prices. We believe that housing is a human right and the center of a person’s ability to thrive, and tenants, specifically the most vulnerable tenants living in weekly motels, are consistently left out of this conversation.

It is long past time to talk about the housing crisis, and we need strong leaders with a working class background like Governor Steve Sisolak to remain in office and continue to focus on affordable housing in our state. Joe Lombardo is a dangerous choice for Nevada tenants. His only housing plans include giving funds to corporate landlords which would just lead to further exploitation of Siegel Suites Tenants, like the mom who cared for her children and the retired woman struggling to get by. Reelecting governor Sisolak is the only option for Nevada Tenants to thrive and not just survive.”

“Everyone, regardless of race, background, or income deserves to live with dignity and have adequate shelter. While the recovery is still ongoing and many are still struggling, under Gov. Sisolak, Nevada is making substantial progress on fixing this critical issue,” said Maria-Teresa Liebermann-Parraga, Deputy Director of Battle Born Progress, “While the pandemic was rough for countless working Nevadans, and there is still a long way to go, Steve Sisolak has made it a priority, both during the pandemic, and in looking towards the 2023 legislative session, to find ways to keep Nevadans in their homes, increase construction of new affordable housing, and explore options to lower the cost of rent, including rent control.

Homes are for families, not corporations. While most Nevadans were looking to make ends meet, corporate landlords were looking for ways to maximize profits. We need elected officials who will listen to Nevadans’ concerns like Governor Sisolak. Joe Lombardo has not presented any plan for reducing housing costs or taking on slumlords who are driving this crisis. Lombardo thinks profits for slumlords are more important than keeping Nevadans in their homes, which is why he’s wrong for Nevada. Sisolak is for keeping Nevadans in their homes. Lombardo is for slum-lord billionaires who help to fund his campaign. The difference between the two candidates and their plans (or lack thereof) could not be more different. Nevadans should remember this as they go to vote in 2022.”