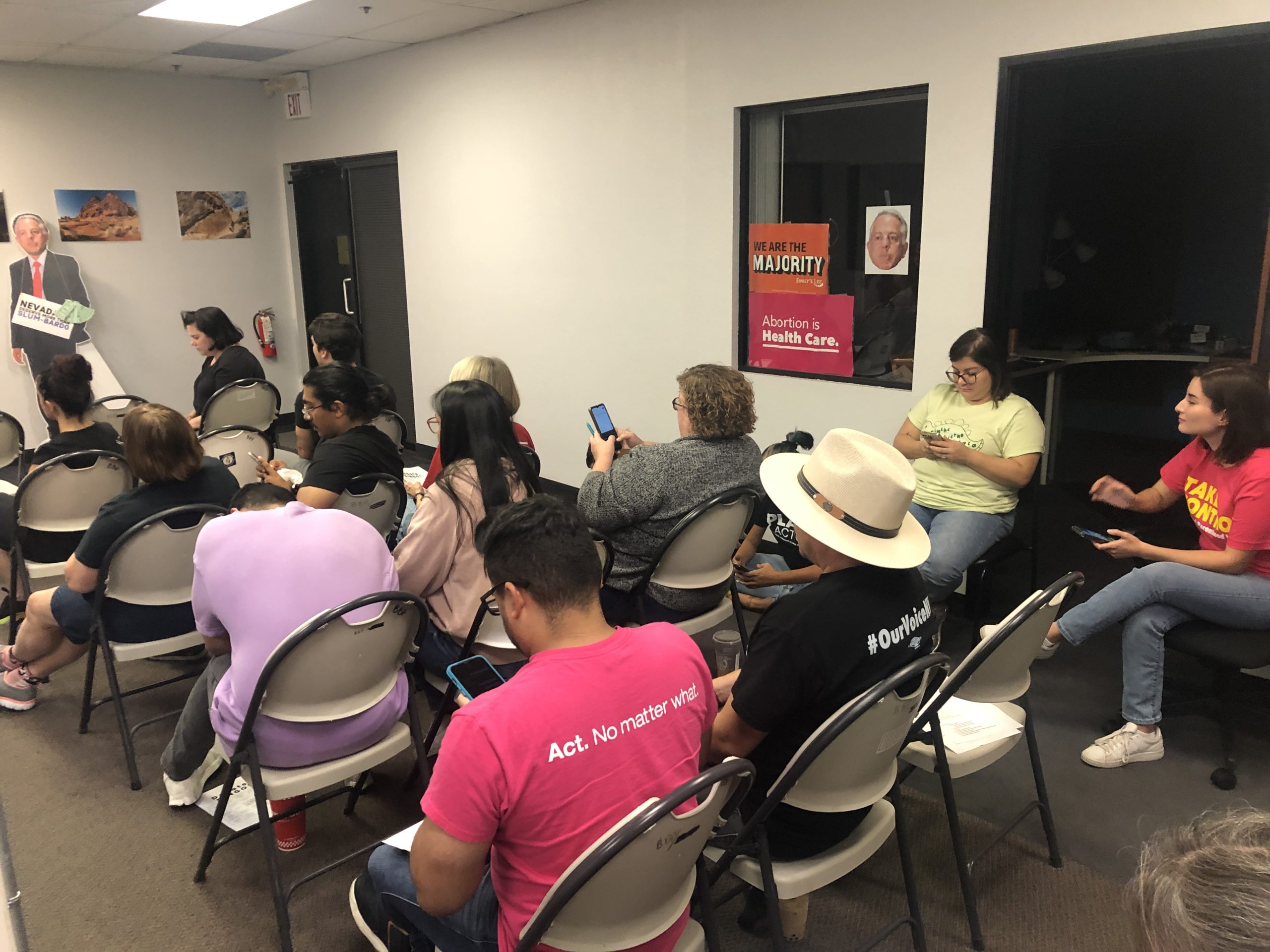 LAS VEGAS, NV – Monday evening, progressive activists and organizations gathered their members for a watch party of the televised broadcast of the Nevada Gubernatorial Debate between Steve Sisolak and Joe Lombardo. Groups and organizations in attendance issued the following statements reacting to the debate.

*NOTE: All host organizations are nonpartisan, Independent Expenditure groups – the watch party and its hosts, are NOT coordinated with any candidate or party.*

“Tonight’s debate showed exactly why voters in Nevada deserve more opportunities to hear from candidates side-by-side. The contrast between the two candidates couldn’t be more clear, with current Governor Steve Sisolak outlining clear, specific plans already in motion to move Nevada forward, while Joe Lombardo could barely clarify his own stances on issues like abortion, education, and affordable housing,” said Annette Magnus, Executive Director of Battle Born Progress. “During the pandemic, Governor Sisolak took difficult, but necessary steps to save lives in Nevada, listening to the guidance of medical experts. Now, Sisolak is steering Nevada’s economic recovery, bringing back even more jobs than the state had pre-COVID, and working to create good-paying jobs by attracting professional sports, artists, and entertainers from all over the world, as well as investing in infrastructure with federal dollars. Most recently, Sisolak made the largest investment in affordable housing the state has ever seen, to the tune of $500 million and is working to lower health care costs with the rollout of a public option for health coverage, and a new program to lower prescription drug costs. In addition, Sisolak made it clear once again that he will stand up to defend access to abortion, contraception, and reproductive health care.”

“By contrast, Joe Lombardo stumbled and was caught flat-footed at numerous points during the debate. On abortion, he couldn’t give a straight answer on whether he’d sign legislation, as governor, chipping away at abortion access or whether he’d keep in place protections for patients traveling to Nevada. His evasiveness on this question was simply unacceptable – for Lombardo to expect Nevadans to trust him and have a clear understanding of his position is frankly insulting. The only conclusion we can draw is that he’s embarrassed by his original statements, pre-flip-flop, and is now desperately trying to save face as he realizes how unpopular restrictive abortion laws are with Nevadans.”

“While he has lots to say about problems working families in Nevada are experiencing on education, housing, and higher costs, he presented no solutions aside from diverting more money from public schools to a private school voucher-scheme, and finger-pointing at the legislature to make excuses for why he can’t do his day-job fighting crime as Sheriff of Nevada’s largest county. It’s clearer than ever after tonight that Lombardo is as woefully unprepared for the job of governor as he was for Clark County Sheriff, and will say anything he needs to in order to win. Meanwhile, Sisolak made it clear he is for strengthening the economy for working families and small businesses, taking concrete steps to provide good-paying jobs, a quality public education, affordable housing and affordable health care for every Nevadan. We will be working over the next several weeks to ensure all eligible Nevada voters are educated about their options for Governor during this critical midterm election in Nevada.”

“Through his actions and tonight’s debate performance, Governor Sisolak has demonstrated his commitment to Nevada’s working families,” said For Our Future Nevada State Director Gariety Pruitt. “Joe Lombardo showed he has no plans to make housing more affordable, reduce healthcare costs, or improve Nevada’s public schools. The choice in this race is clear – Steve Sisolak will fight for working families and he deserves another four years as Governor.”

Statement from Laura Martin, Executive Director of PLAN Action: “Nevada voters want a Governor who will help them thrive, not just survive. That can only be achieved if Governor Sisolak is re-elected in November, and the voters we talk to know that. This election will determine whether or not Nevadans will win big in the next two legislative sessions, which is critical to the thousands of  Nevadans we’ve spoken to across the state who are struggling to make ends as rent prices remain high, and tenants have very little protections against gouging and predatory landlords. Governor Sisolak has shown our community that he is committed to fighting for Nevadans when it comes to affordable housing, the economy, and reproductive freedom. In contrast, Nevadans can’t be certain that Joe Lombardo will represent their needs. His campaign is bankrolled by a billionaire housing speculator, and he is constantly flipping stances on abortion rights, but often siding against a person’s right to choose. Nevadans can’t trust Lying Lombardo, certainly not while his education plan includes school ‘vouchers’, that would undeniably siphon hundreds of millions of dollars from public school students and teachers.:

“The choice for Nevada’s voters this fall is clear. In tonight’s townhall, Gov. Steve Sisolak not only demonstrated empathy for abortion patients and providers in other states who are now seeking and providing care in Nevada, but also showed forward-thinking leadership and dedication to protecting Nevada’s reproductive freedoms long-term.

Joe Lombardo on the other hand, showed his ignorance around reproductive health care and Nevada abortion laws, and apathy towards the reality for abortion patients across the country in a post-Roe world. That is not what Nevadans need in a governor. We need a proven leader who we can trust to defend the reproductive freedoms of Nevadans with compassion and grit — not another anti-abortion politician pretending to care about abortion rights to score points in an election only to turn around and legislate according to his personal beliefs once in office. This November, voters will re-elect Gov. Sisolak to protect our rights.”

“Working families, including Latinos, continue to keep Nevada going,” said Cecia Alvarado, Nevada Executive Director for Somos PAC. “But only one candidate mentioned the very backbone of our state’s economy by name during the debate, and that’s Governor Steve Sisolak. We simply cannot trust Joe Lombardo to look out for working people like us. That is why we will continue knocking on doors and organizing community events to re-elect Governor Sisolak and ensure that he can continue to bring more opportunities for all hardworking Nevadans to build a better life for themselves and their families.”