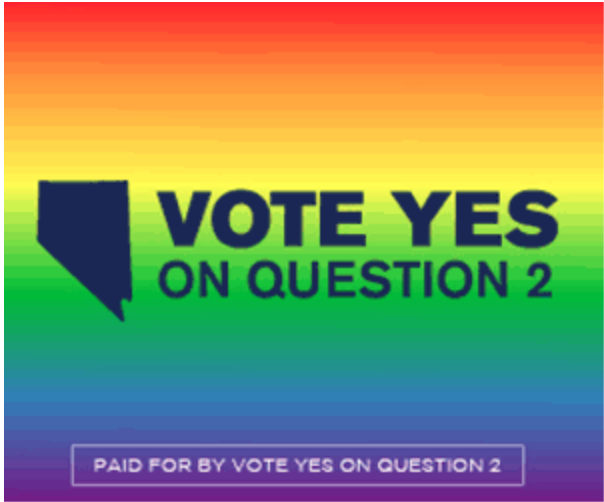 Posted at 22:10h in News by Will Pregman
0 Likes
Share

LAS VEGAS, NV–  As votes continue to be counted in Nevada, The Associated Press reports that Nevada overwhelmingly supported the Question 2 ballot amendment with a majority of 61.2% voting YES after 71% of the count was reported.

Question 2 amends the Nevada Constitution to recognize marriage between couples regardless of gender, removing the discriminatory language that defined marriage as solely between a man and woman.

“This election, a majority of Nevadans supported an end to discriminatory language in the Nevada Constitution with the passage of Question 2. We are proud of the work we did to support this resolution in the legislature, and spread the word through social and traditional media to drive support for this initiative. Question 2 will amend the Nevada Constitution to recognize all marriages, regardless of gender. This affirms that love is love in the state of Nevada, and we are open for business as the wedding capital of the world to all couples. Today marks a major victory for equality of LGBTQI+ Nevadans.”

“As we all continue to monitor the slow drip of election results in Nevada and across the country, knowing that we won Question 2 brings me feelings of joy and excitement. I’m so proud of Nevada voters for doing the right thing and making sure same sex-sex couples know they are home in Nevada. It has been a genuine pleasure to work with our campaign colleagues and volunteers and to see how much our state has embraced sex and gender diversity over the last decade.”

“For more than 25 years PLAN has been working to promote LGBTQ rights in Nevada, from the passage employment non-discrimination legislation, to today’s victory for Question 2. Thanks to tireless advocates who never gave up hope, it is now clear in our state’s constitution what we always knew to be true, that Nevadans believe in the fundamental civil rights for all people like the freedom to marry.“

“Nevada has led the way in the nation on LGBTQ+ protections for decades. Yesterday’s results clearly demonstrated that openly LGBTQ+ Nevadans and our allies continue to win up and down the ballot  with a diverse base of support from voters. Nevadans have sent a clear message that they want leaders who fight for our common values.”

“Nevada is made up of diverse people from all walks of life and we are all trying to do the best we can in this world. Having the people we love and lean on by our side for this journey helps make us stronger. Being able to marry whom we choose to marry should be our decision, and Nevadans clearly agree. We are thrilled to see Question 2 pass with so much support. Thank you to the people and organizations that helped champion this change, and thank you to the voters who upheld the independent spirit that is Nevada and voted to make this change.”