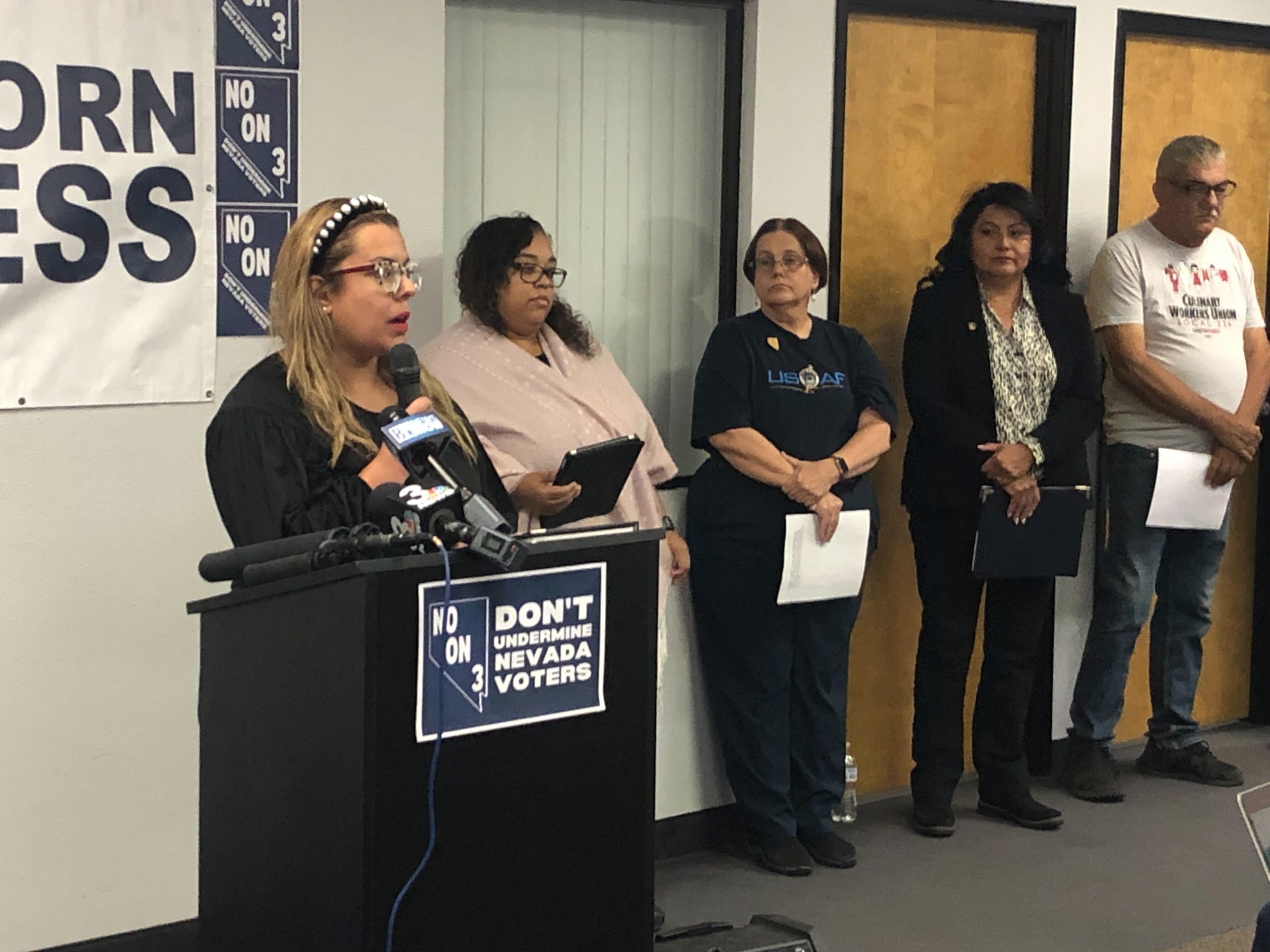 Las Vegas, NV – Monday, Nevada voting rights and labor leaders gathered in Las Vegas to denounce the flood of outside spending – totaling $17 million in September – by a handful of out-of-state corporate billionaires to try to deceive Nevada voters into supporting Question 3 in our state.

If passed, the Question 3 ballot initiative would impose a complicated and confusing ranked-choice voting system that would disenfranchise thousands of voters and make it harder and more time-consuming for hardworking families to participate in our democracy. It would lock this ranked-choice system into our state constitution and make it nearly impossible to undo.

“In the most recent contributions and expenditures report for the organization sponsoring Question 3, we learned it is funded by out-of-state billionaires and special interest groups who are spending millions of dollars to deceive voters into supporting this ranked-choice voting ballot initiative,” said Emily Persaud-Zamora, Executive Director of Silver State Voices and head of the Let Nevadans Vote Coalition. “We aren’t afraid of changes to our electoral system. We have a long history of advocating for pro-voter policies and will continue to do so in the name of access, equity, and fairness. Ranked-choice voting is not a policy that aligns with our pro-voter stance.”

“The Question 3 campaign is led by and funded by operatives from Nevada Realtor organizations,” said Laura Martin, Executive Director of the Progressive Leadership Alliance of Nevada Action Fund. “The same people who blocked us at every turn to keep people in their homes and stop wild rent increases during the pandemic. They claim they want to ensure more people can participate in Nevada elections, but these same people inserted themselves in a matter between the north las vegas city council and the culinary union to kill a ballot initiative to provide neighborhood stability in Nevada – essentially silencing the voices of 10s of 1000s of north las vegas voters they now claim to care about.”

“I was a cook at Fiesta Henderson before Station Casinos fired me during the pandemic”, said Guadalupe Saucedo, Culinary Union member. “Station Casinos fought every step of the way against Senate Bill 386, which would give me my job back once my casino reopened. Instead of rehiring me when the economy started to recover, they demolished my casino and left me without a job. I can’t trust this very anti-union company that has contributed a lot of money to the Question 3 campaign. Question 3 would make casting a ballot in Nevada more complicated, confusing, and time-consuming.”

“Nevada has in recent years made great progress to expand voting access, implementing policies like automatic voter registration, same-day voter registration, secure ballot drop boxes, expanded mail-in voting, and other reforms that promote the security, efficiency and accessibility of our elections,” said Mary Dungan, veteran, and Nevada voter. “Question 3 will undermine this work. It will make our elections more complicated, confusing, and time-consuming for voters. In other places that have tried it, this system results in thousands of ballots being rejected – up to 5 times as many – from the final vote tally because of errors.”

“My members voted against supporting this initiative at our COPE Conference because we understood the detrimental effects that this would have on Nevada’s working families,” said Susie Martinez, Executive Secretary-Treasurer, Nevada State AFL-CIO. “We stand with our members and urge voters to reject the corporate billionaires and special interests behind this initiative by voting No on Question 3.”

Early voting in Nevada runs from Oct. 22 – Nov. 4th, and Election Day is on Nov. 8th. Every registered voter was sent a mail ballot. Mailed Ballots must be postmarked ON or BEFORE Tuesday, November 8th, 2022 by 7:00PM, and received by 5:00 PM on Saturday, November 10th, 2022. Instead of mailing the ballot, voters may also fill it out, sign the return envelope, and drop off your ballot at any designated polling location or ballot drop box within their county of residence, from October 22nd – November 4th 2022 or on Election Day, November 8th.

For a list and schedule for drop-off locations in Clark County, go here.