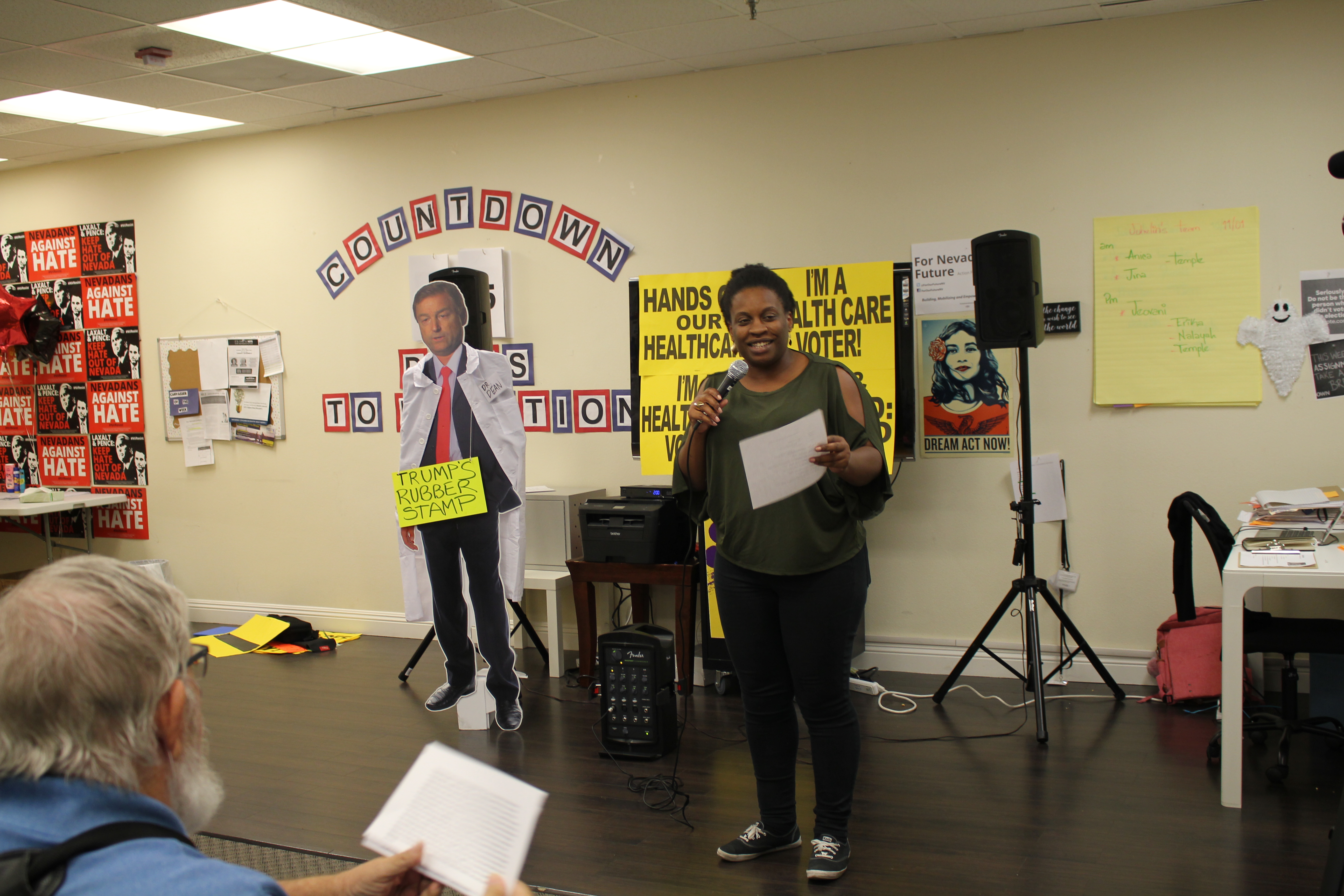 Las Vegas, NV – In the final two days of early voting, Nevada voters who double as field organizers, canvassers, and volunteers shared personal stories about healthcare. They gathered in For Nevada’s Future office to kick off the afternoon’s GOTV canvass. Senator Heller has repeatedly voted against the interests of working families in Nevada by siding with the Trump administration’s sabotage of the Affordable Care Act.

The Kaiser Family Foundation polling found that healthcare is overwhelmingly the top issue for independent voters in the 2018 midterm election. Real people affected by our healthcare system, which Heller has been working to defund and destroy, are driven by their situation to make their voice heard and make sure others are voting with them. Heller has voted to repeal the Affordable Care Act, to eliminate the individual mandate, and to keep junk insurance plans which exclude individuals with pre-existing conditions. Heller continues to try to make Nevadans sick and poor. Today, organizers, canvassers, and volunteers spoke out against the Senator who votes against their interests.

Chariesse Gress, canvasser with For Nevada’s Future, said, “The reason why I do this is because my mom is dependent on healthcare – right now she needs six surgeries on her legs, knees, and back… I knock on the doors of hundreds of elderly people, and they are in the same position with pre-existing conditions.”

Alex Camberos, organizer with Nevada Advocates for Planned Parenthood, said, “Dean Heller has a track record of saying one thing and then voting another way. He went against Governor Sandoval when it came to expanding Medicaid and abandoning his constituents by voting to repeal the Affordable Care Act, which would cut healthcare for hundreds of thousands of Nevadans, including me.”

Justin Jaramillo with OneAPIA stated, “As a father, I want to protect and build a future where my son can play, go to school, and thrive in a healthy community… At the doors, I hear that many of my neighbors are worried about their healthcare and that it will be taken away by individuals who do not have our communities’ well-being as a priority.”

Randy Peters, canvasser with the Nevada AFL-CIO, said, “This work is important because I get to talk to people about the power of their vote… But more importantly, what happens in this election really affects me and my family. My wife has a pre-existing condition, but together we are able to manage because of the Affordable Care Act.”

Steve Horner, a Vietnam veteran and campaign volunteer, said, “I have a pre-existing condition. I have COPD that is not service related and would be an excluded condition for any health insurance if Dean Heller had his way. When Heller co-sponsored the Graham-Cassidy bill, that would allow states to strip out coverage for pre-existing conditions, he showed his loyalty was not with Nevada citizens, but rather insurance lobbyists and Donald Trump.”