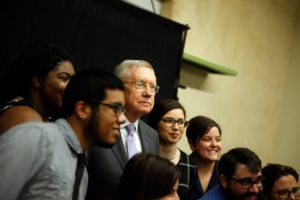 Senator Harry Reid, Democrat of Nevada and the minority leader, at an awards dinner for Battle Born Progress in 2016
Photo credit: Isaac Brekken for The New York Times

“Today is a sad day for Nevada to lose one of its greatest champions, Senator Harry Reid. Senator Reid has a long history of serving Nevadans at all levels of government coming from his humble beginnings as a son of his beloved Searchlight. While representing us as a leader in the U.S. Senate, Reid did not merely serve Nevada, he championed it by fighting hard for the issues Nevadans care about like immigration, healthcare, protecting our public lands, and more. It is deeply bittersweet that his death happened today, of all days, as today marks the 5th anniversary of the designation of Gold Butte National Monument, an issue to which Reid dedicated many years. We are honored that we were able to work alongside Senator Reid on that and many efforts to make Nevada a better place to live and we are glad that we were able to honor his accomplishments alongside him in-person at our 2016 Celebrate Progress fundraiser as our Progressive Leader of the Year. We give our condolences to his family and know that he will rest in power.”