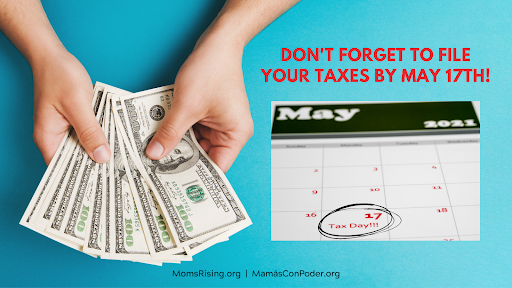 Posted at 18:08h in News by Will Pregman
2 Likes
Share

After years of struggling with increasing premiums, shrinking coverage and skyrocketing prescription drug prices, Americans finally see meaningful relief on the horizon in the proposals put forth by the Biden Administration to create jobs, invest in healthcare, and rebalance the tax code so that the wealthy and corporations pay more toward building an equitable economy.

Today, Battle Born Progress will be hosting a Facebook Live Event at 6pm PST for activists discussing Tax Day, the Child Tax Credit and more of the American Rescue Plan. You can click here to view.

“After what seems like forever there is finally hope that the Biden Administration will be taxing the wealthy and corporations fairly,” said Annette Magnus, Executive Director of Battle Born Progress. “For years there have been loopholes that have allowed these wealthy individuals and corporations to not pay their fair share of taxes, hurting millions of regular taxpayers, even as they saw their own wealth grow by $4 trillion during the pandemic. Many here in Nevada were impacted by COVID-19, with 319,714 being infected. During this time, many Nevadans that already struggle to pay rent and put food on the table have been burdened even further with the fear of losing their jobs and homes, while Big Pharma and billionaires don’t even appear to lose sleep. This is why we’ve got to support what the Biden Administration is doing and finally start taxing the rich fairly as well as holding pharma companies accountable for the turmoil they have caused.”

Access to quality, affordable healthcare everyone can count on, including affordable prescription medicines, is a cornerstone of economic security and equity. Even before the COVID-19 pandemic, millions of people in the United States–insured and uninsured–were struggling to keep up with the healthcare costs that cause patients to forgo treatment, to incur debt, or to go without other basic necessities. After passage of the Affordable Care Act in 2010, the number of uninsured people declined by 20 million people, a historic low.  But under President Trump, the trend was reversed and the number of people without coverage rose, including by 18,000 in Nevada between 2016 and 2019.

COVID-19 worsened the situation as millions of people lost jobs, income and health insurance during the first year of the pandemic. Federal relief packages that expanded unemployment insurance, healthcare access, and support for nutrition and housing needs helped mitigate the worst harm.  But now, as the nation turns to recovery, it’s clear that returning to the status quo will leave families vulnerable to a future crisis whether it’s an accident, an epidemic, a natural disaster or national security breach.

In his first speech to a joint session of Congress, Biden said: “Healthcare should be a right, not a privilege in America.” President Biden has proposed key investments in nutrition, jobs, paid family medical leave, and anti-poverty programs that improve health outcomes. He proposes to make permanent improvements in healthcare affordability that will ensure more people have coverage they can count on. Finally, he proposes to raise taxes on the households making over $400,000 and on corporations, including those that offshore jobs and taxes, to fund these investments and reshape the economy.

In 2017, President Trump signed the Tax Cuts and Jobs Act tax law that cut the individual mandate provision of the Affordable Care Act (ACA) in order to pay for tax breaks that largely benefit upper income households and corporations. The Congressional Budget Office (CBO) predicted that eliminating this ACA provision would result in higher premiums and fewer people with coverage. A Kaiser study showed that the tax law increased premiums by an average of 6% in 2019. An updated CBO analysis predicts that 7 million more people will be uninsured in 2021-2029 because of the TJCA’s impact on the individual mandate.

Trump’s tax law could provide an even bigger tax windfall for wealthy households and health industry corporations pending the outcome of a Supreme Court lawsuit that challenges the constitutionality of the ACA based on the changes to the individual mandate provision in the TJCA.  A group of Republican state attorneys general initiated the California v. Texas case. The lawsuit argues that without enforcement of the penalty, the individual mandate is no longer a tax and therefore unconstitutional. The plaintiffs also claim that without the mandate the entire law is invalid and should be struck down. A decision in California v. Texas is expected by summer of 2021.

A Supreme Court decision to overturn the ACA would result in 81,903 Nevadans losing marketplace coverage, 410,096 losing Medicaid, and 487,000 losing protections against discrimination based on pre-existing  health conditions which now could include COVID. In Nevada, 319,714 COVID survivors could be charged more or denied services and coverage without the ACA. Services like prescription drugs, maternity, mental healthcare and other mandatory essential health benefits may no longer be covered under policies if the ACA is no longer law. 57,555 in Nevada who receive premium tax credits to make coverage more affordable, would lose $390 a month in tax credits while households making $1 million or more would get a big tax giveaway.

The ACA is financed primarily by taxes on upper income individuals making over $200,000 (and couples making $250,000 or more) annually and taxes on health industry corporations like prescription drug companies. Repealing the ACA would give the richest 0.1 percent of Americans—people making more than $3 million annually—tax cuts averaging $198,250. Wealthy people making over $1 million would get a $42,000 tax break annually. Prescription drug corporations would also get an annual tax break of $2.8 billion if the ACA were repealed.

COVID-19 Heightens Urgency for Congress to Put Healthcare Over Wealthcare

The COVID pandemic has had a devastating health and economic impact on Nevada. Between the start of the pandemic and May 1, 2021, 319, 714 in Nevada have lost lives or been infected with COVID. In March, 2021, a year after the pandemic started, about 20 million adults in the United States, including 229,000 in Nevada were still struggling to put food on the table and 1 in 7 renters were behind on rent, including 172,000 people in Nevada.

Many of these hardships resulted from layoffs and job losses. Unemployment peaked at 14.8% in April, 2020, the highest level ever recorded, after COVID-19 was declared a pandemic. Overall, part-time workers, workers without college degrees, women, Blacks, Latinos, Indigenous people, and immigrants were more impacted by job loss and have seen slower improvement in employment than white, college educated workers. In 2021, unemployment rates remain high across the states. In the first three months of this year, the average unemployment rate in Nevada was 8.3%. While there is some improvement in jobs numbers, Nevada still has 146,600 fewer jobs than before the pandemic started and a higher rate of unemployment, particularly for low-wage industries like food service and hospitality, which were hardest hit by the pandemic.

Along with jobs, millions of people lost their health coverage. The Commonwealth Institute estimates that  over 7 million workers lost jobs with employer sponsored insurance, resulting in over 14 million covered dependents also losing coverage. Some people were able to replace that coverage thanks to Medicaid, which grew by over 7 million enrollees in 2020. Medicaid enrollment in Nevada increased by over 15% last year as job loss and income loss enabled many more people to qualify. But too many people still lack coverage and even among those with coverage, affordability is a struggle.

One third of people with insurance, for instance, can’t afford prescription medicines because either their insurance doesn’t cover the medicine or it’s still too expensive. A Harvard/NPR survey found that the problem is more pronounced among lower-income people: among those earning less than $35,000 a year, 51% did not fill prescriptions. For those earning between $35,000 and $99,999, the study found that 48% did not fill prescriptions.  The price of prescription drugs is rising faster than any other good or service.

Prescription drug corporations, including those receiving billions in taxpayer funding for development and manufacture of a COVID vaccine like Pfizer and Johnson & Johnson, increased prices on over 850 drugs by about 5% in 2020. That continues a long trend by which drug corporations, which have exclusive monopoly authority to charge whatever price they want for medicine, have raised list prices typically twice a year in January and July.  By and large, those increases are on medicines that taxpayers also contribute to developing: between 2010 and 2019, every single new medicine approved by the Food and Drug Administration included taxpayer-funded research through National Institutes of Health (NIH).

In 2021, Pharma corporations began the year by raising prices again. So far this year, drug corporations have increased the price of 822 prescription medicines by an average of 4.6%. At the same time, drug industry lobbyists have spent a record amount lobbying in the first quarter of 2021 in an effort to stop any legislation or policy that would put limits on their monopoly power to set prices and to keep them as high as they want.

Aggressive lobbying is one reason why prescription drug corporations are the most profitable companies in the United States, with profit margins for the 35 largest drug corporations nearly twice as high as at least 350 companies in the S&P 500. Pfizer is projected to make $26 billion on the COVID vaccine alone this year and over $70 billion in total. Pfizer as well as other drug corporations will get a big discount on their taxes from these massive revenues thanks to the Trump tax law.

The TJCA slashed the corporate tax rate on domestic profits by 40%—from 35% to 21%—giving five of the biggest drug corporations an estimated total of $8.2 billion in tax cuts in 2018. The Pharma Big 10 were also handed a one-time tax discount worth an estimated $70 billion on their accumulated offshore profits. The drug industry is second only to information technology in offshore profits.

These corporations also benefit from taxpayer funding thanks to investments in research and development by the National Institutes of Health (NIH) and other government agencies, from inflating drug prices in taxpayer funded programs like Medicaid and Medicare Part D, and from a tax loophole that rewards them for aggressive marketing to consumers through television ads.

The President’s “Made in America” Tax Plan proposal would reverse portions of the 2017 Trump tax law and raise significant revenue for investment in healthcare and other services by making wealthy households and corporations pay their fair share of taxes.

Biden’s tax and investment proposals, if passed by Congress, would go a long way toward rebuilding the economy and doing so more fairly. The pandemic has only served to expose and deepen inequality whether in the economic system or in healthcare. Now is the time to “build back better,” with policies that address these long-standing issues while providing needed stimulus and recovery from the pandemic.

Healthcare for everyone in America is within our reach as a nation and it starts with the rich and corporations paying their fair share for the investments in healthcare and related services that would transform our economy and ensure freedom, prosperity and health for all, not just just the wealthy few.

Battle Born Progress: Battle Born Progress, through strategic communication efforts, empowers, engages and mobilizes Nevada voters to build a state where everyone has a fair opportunity to succeed. We support, engage, and mobilize the progressive community through bold leadership, strategic communications, accountability, and education. We are on the cutting edge of new media and are the go-to source for progressive issues and advocacy for traditional media. Learn more at https://battlebornprogress.org/.