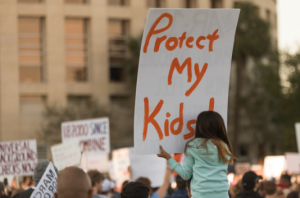 “While throughout the developed world, schools are spaces for learning, growth, and knowledge, here in the United States our children are terrorized in their schools. Now a school in our own community has suffered the consequences of gun violence.

No parent, child, or educator should fear for their safety in what is meant to be a learning environment. How can we expect our children to learn, grow, and take risks if they are living in fear of getting shot?

In less than a month, we will be remembering the senseless massacre of October 1st. Today we ask the same questions we asked after Las Vegas suffered from the worst mass shooting in history. When will we hit our tipping point? How many people have to die before our elected officials will pass common-sense gun legislation?”