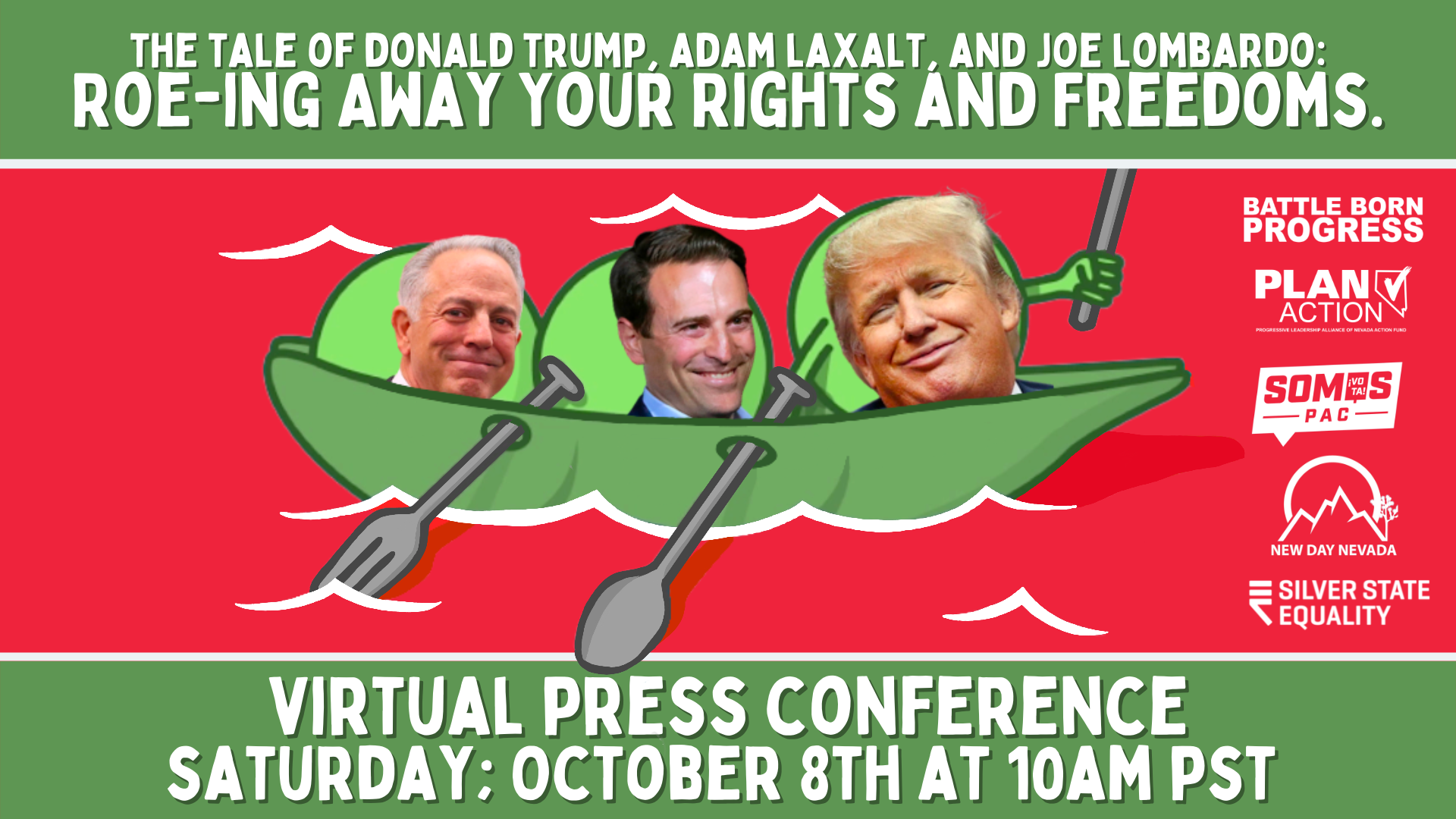 NEVADA – As the election draws closer more and more people are coming out of the woodwork including Donald Trump. His campaign stop today in Minden, Nevada is reminiscent of the stop he made in 2020. This time, local groups responded in earnest. Advocates gathered to discuss the concerning rhetoric used by Trump and his allies. In addition, folks called out their lack of policy solutions to the real issues facing Nevadans. While Adam Laxalt has railed against Senator Cortez Masto for high gas prices and inflation, he has been very quiet concerning the profits he’s taken in from companies like Chevron. Joe Lombardo has repeatedly flip-flopped on abortion and attacked Governor Sisolak on economic issues. Yet, Lombardo has no plan to solve our affordable housing crisis or make sure Nevadans can pay their bills. Instead, these candidates focus on culture war issues that do not serve any purpose other than to divide us. Finally, Battle Born Progress purchased billboards on North Highway 395 in Carson City and I 580 near the South Meadows Parkway exit in Reno. These billboards represent our viewpoint that Donald Trump, Adam Laxalt, and Joe Lombard are truly three peas in a pod.

“It’s no surprise that Trump chose Minden, NV to hold a campaign rally for Laxalt and Lombardo. This is the same site he chose in 2020 when Reno refused to let him hold a superspreader event at their airport. While Lombardo attempted to get some distance from Trump during the recent debate with Governor Sisolak, Nevadans know they are aligned. Evidenced by the campaign appearance later tonight. Our elected officials should have more responsibility in who they let endorse and support them. By continuing to align with Donald Trump both Laxalt and Lombardo are linked to dishonest claims of voter fraud, a lack of policy solutions for the working class, and a xenophobic leader who seeks power at all costs. They are all bad for Nevada and we will not stand for it.”

“While Trump, Laxalt, and Lombardo take their hateful rhetoric tour to rural Nevada tonight, I’m reminded of the first Winnemucca Pride festival in July of 2021. Governor Sisolak went out to support this event. Rural Nevada was ecstatic to have him support their community in celebrating life and love. With the Republican ticket, we get hate, division, and lies. They lie about who we are and what we represent. Nevadans have a clear choice this November between candidates who support legislation to silence the LGBTQ+ community and those who show up for us both legislatively and in our communities.”

“If there is anyone Adam Laxalt and Joe Lombardo will look out for, other than themselves, it’s Donald Trump, not hardworking Nevadans, and certainly not Latinos. They continue amplifying their Trump endorsement one day and backpedaling it the next, but their similarities go far beyond a simple endorsement. Their actions have harmed our communities and made it harder for our families to get ahead. Working families are the engines of Nevada’s economy. We need real leaders who have an actual track record of keeping our families safe and providing us with the opportunities we need to build a better future for ourselves, our families and for our state, just like Sen. Catherine Cortez Masto and Governor Steve Sisolak.”

“As a lifelong northern Nevada resident I am embarrassed to see Adam Laxalt and Joe Lombardo campaigning with Donald Trump. In a recent debate, Joe Lombardo did his best to distance himself from Trump. Now they are three peas in a pod. The truth is they are all aligned regardless of any attempt to distance themselves from Trump. I refuse to believe that our future includes candidates who are actively spreading misinformation, hate, and division. The choice is clear this November. Currently, we have a Governor who has prioritized working people and stood up for marginalized community members. Senator Cortez Masto has worked to provide housing assistance and she has stood up for bodily autonomy. We need leaders who know the issues regular people are facing every single day. Adam Laxalt, Joe Lombardo, and Donald Trump are so far removed from the struggles faced by everyday Nevadans that they don’t bat an eyelash at their disingenuous rhetoric focused on culture wars. Nevadans want real change and real solutions no partisan politics seeking to divide us.”

“Nevadans are tired of partisan politics and division. Trump’s visit to Minden to support them is a clear sign that Adam Laxalt & Joe Lombardo are not right for our state. Even in the recent debate, Joe Lombardo attempted to distance himself from Donald Trump. Hours later Lombardo’s campaign released a statement attempting to rectify their error. This demonstrates how beholden Lombardo is not to Nevadans but to Donald Trump. The same individual who has catered to extremist groups and traffic in election fraud narratives that further divide our country and threaten our democracy. Nevadans have leaders who are working for them. The choice is clear this November.”