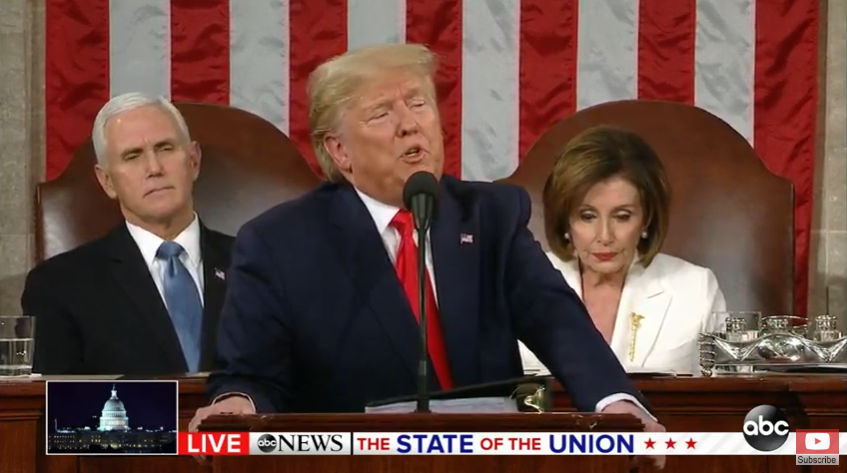 Trump spreads fear and misinformation in State of the Union address

LAS VEGAS, NV – Tonight, impeached President Donald Trump delivered his annual State of the Union address in the nation’s capital. The speech doubled down on flagrantly dishonest talking points around the economy, healthcare, immigration, and more.

“Whenever President Trump opens his mouth, hatred, lies, fear-mongering, or some gruesome combination of the three, spill out into the ether to further divide and mislead the nation. Once again, his annual address reveals his horrifyingly loose grip on the reality that Americans, and Nevadans, are experiencing under his unpopular administration. This year, he does so with the albatross of impeachment for abusing his power as President to interfere with our election hanging over his head.

Trump’s boast about the strength of the economy omits the experiences of working families. While the stock market is performing well, wage growth has been far slower and has not kept up with the ever-rising cost of housing, healthcare, and education. American workers are still shouldering the tax burden created by the 2017 tax bill, as shareholders and wealthy corporations rake in record profits.

Since taking office, Trump has made stripping Americans of their healthcare a priority. It’s rich of him to tout his record when he has done nothing, or actively sabotaged, efforts to lower costs of prescription drugs, to cover preexisting conditions, or to expand access to healthcare. Instead, he has caved to big pharmaceutical companies, promoting empty promises and half measures instead of bringing drug costs down. Moreover, Trump has actively supported the Texas v. US lawsuit which, if successful, would eliminate protections for over 1.2 million Nevadans with pre-existing conditions, as well do away with the Medicaid expansion that covers 17 million Americans.

Trump didn’t miss an opportunity to brag about him and the GOP’s crusade to deny people access to abortion. Much like healthcare, Trump, McConnell, and their allies are relying on the courts to overturn Roe v. Wade and attack our equality and freedom. Trump should look to Nevada, where we write policy based on trusting women, and anyone who can get pregnant, with making the correct decisions for themselves and their families.

Trump also doubled down on his racist attacks on immigrants and their families. Most recently, the expansion of his original Muslim Ban to include six more countries further wreaks havoc on immigrant communities across the country. In addition, the Supreme Court’s allowance of the public charge rule designed to starve vulnerable, tax-paying immigrant families of access to healthcare, food, and housing assistance is yet another despicable policy motivated by cruelty.

Under Trump, the State of our Union has decayed immeasurably thanks to one failed policy after another, justified with fear-mongering and literally thousands of outright lies. In Nevada, our leaders in Congress, and our legislature, are fighting to improve the lives of working families in spite of Trump’s blunders and attempts to divide. With any luck, this will be the last time our delegation must endure sitting through a State of the Union address from this out-of-touch disaster of a President.”