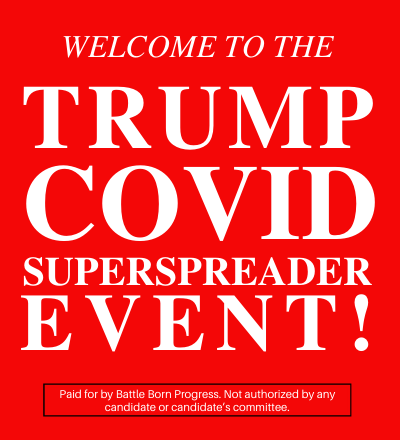 Posted at 14:58h in News by Will Pregman
0 Likes
Share

LAS VEGAS, NV – This weekend, President Donald Trump is scheduled to speak in Carson City just as early voting has begun in Nevada.

“President Donald Trump has decided to bring his COVID-19 super-spreader tour to northern Nevada this weekend. He apparently still clings to the hope that he can win over a state suffering more than others in the country thanks to his lies and thoughtlessness in the handling of this pandemic. Since his last rally in Nevada, Trump has demolished any hopes of relief for states and working families thanks to his own unhinged Twitter ramblings. Real relief that could’ve helped frontline workers, state and local governments, and those still out of work is still precarious due to the unwillingness of Trump or Senator Mitch McConnell to put regular Americans over corporate interests.”

“Instead, Senator Lindsey Graham, at the behest of Trump and McConnell, rushed to hold hearings this past week on a Supreme Court nominee who satisfies the president’s litmus test of being hostile to the Affordable Care Act, Roe v. Wade, and other progressive legal precedents. Poll after poll showed Americans understand that a new Supreme Court justice doesn’t pay their rent or put food on the table. In addition to putting Nevadans’ lives directly at risk by holding large in-person gatherings, Trump’s policy agenda puts Nevada working families’ lives’ broadly at risk by continuously failing to protect them from economic devastation. He’s still very much not welcome here, and the billboard going up in Carson City this Sunday will remind him of that.”