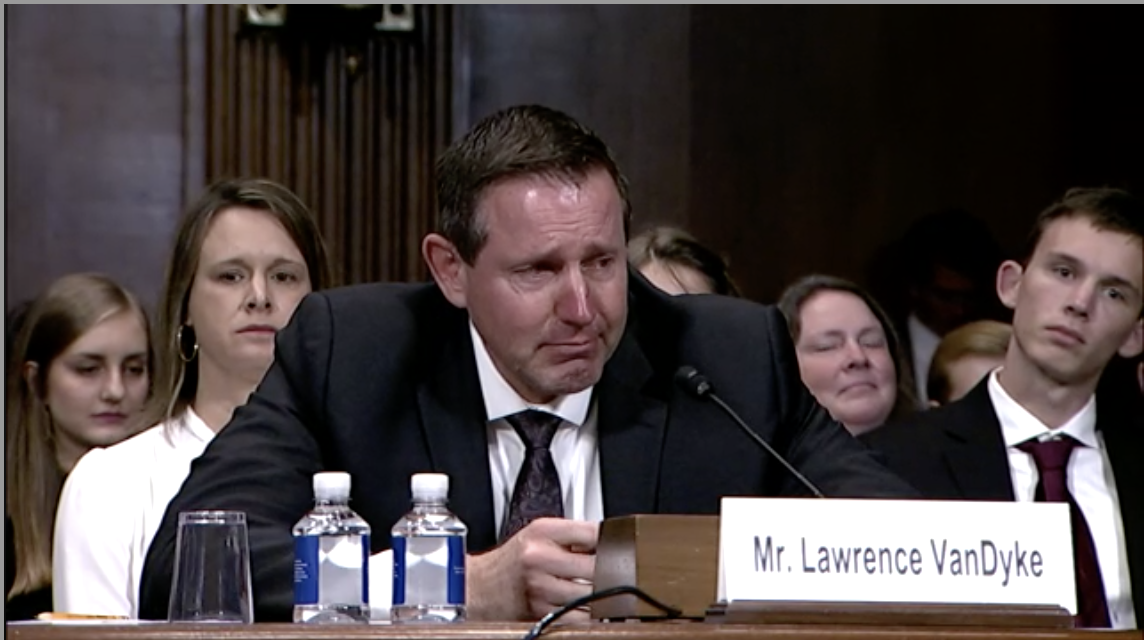 Posted at 16:14h in News, Releases by admin
0 Likes
Share

LAS VEGAS, NV – Today, President Donald Trump’s hand-picked nominees for the 9th Circuit Court of Appeals, Lawrence VanDyke and Patrick Bumatay, testified before the Senate Judiciary Committee and were questioned about their respective records. Trump is on record describing the 9th Circuit as a “big thorn” in his side and a “dangerous disgrace” in response to rulings countering policies his administration’s policies, particularly on immigration.

“When Lawrence VanDyke’s nomination to the 9th Circuit was announced, we were well-aware of his extreme, bigoted, and out of touch beliefs that defined his mediocre career fighting for corporations and special interests over the people and the environment. Today’s hearing, as well as the American Bar Association’s assessment, drove home the reality that VanDyke must not be confirmed for a lifetime seat on our federal bench. His half-truths and obfuscations about his past work for an anti-LGBTQ+ hate group were galling. Furthermore, his inability to maintain composure while playing along with the insinuation of a vast conspiracy on the part of the ABA to sabotage him shows he’s got an axe to grind.

VanDyke’s record betrays his desire to be a conservative activist for causes such as dismantling Roe v. Wade, rolling back civil rights and anti-discrimination laws protecting LGBTQ+ Americans, defending corporate interests from the Clean Air Act and Clean Water Act, and opposing tribal water rights, just to name a few. In addition, his views on gun violence prevention, or lack thereof, are not acceptable for a state that survived the worst mass shooting in modern US history. His unscrupulous carpet-bagging, lack of ties to Nevada, and lack of experience to serve as a judge underscores that he is he is far from trustworthy and fair-minded. We’re committed to working with Senator Catherine Cortez Masto and Senator Jacky Rosen to ensure his full record is laid bare and his confirmation is stopped.”

A thorough analysis of VanDyke’s record was published by the Alliance for Justice. Yesterday, the American Bar Association gave VanDyke a ‘Not Qualified’ rating in a letter which stated, “Mr. VanDyke’s accomplishments are offset by the assessments of interviewees that Mr. VanDyke is arrogant, lazy, an ideologue, & lacking in knowledge of the day-to-day practice including procedural rules.”

As Montana’s Solicitor General, VanDyke advocated for the overturn of Roe v. Wade in an amicus brief he co-wrote to support a 20-week abortion ban in Arizona, and recommended that his Attoreny General also file a brief defending a photographer who refused business to a lesbian couple in New Mexico. He has also been a loyal foot-soldier for the gun lobby, filing multiple briefs fighting against gun violence prevention legislation across the country.

Finally, as Solicitor General for Nevada, VanDyke was given special permission to practice law in here, despite never passing the State Bar, due to his relationship with his good friend, former Attorney General Adam Laxalt. Laxalt is no stranger to calling in extralegal favors for his friends who are in a bind, which casts a shadow on VanDyke, given the company he keeps.