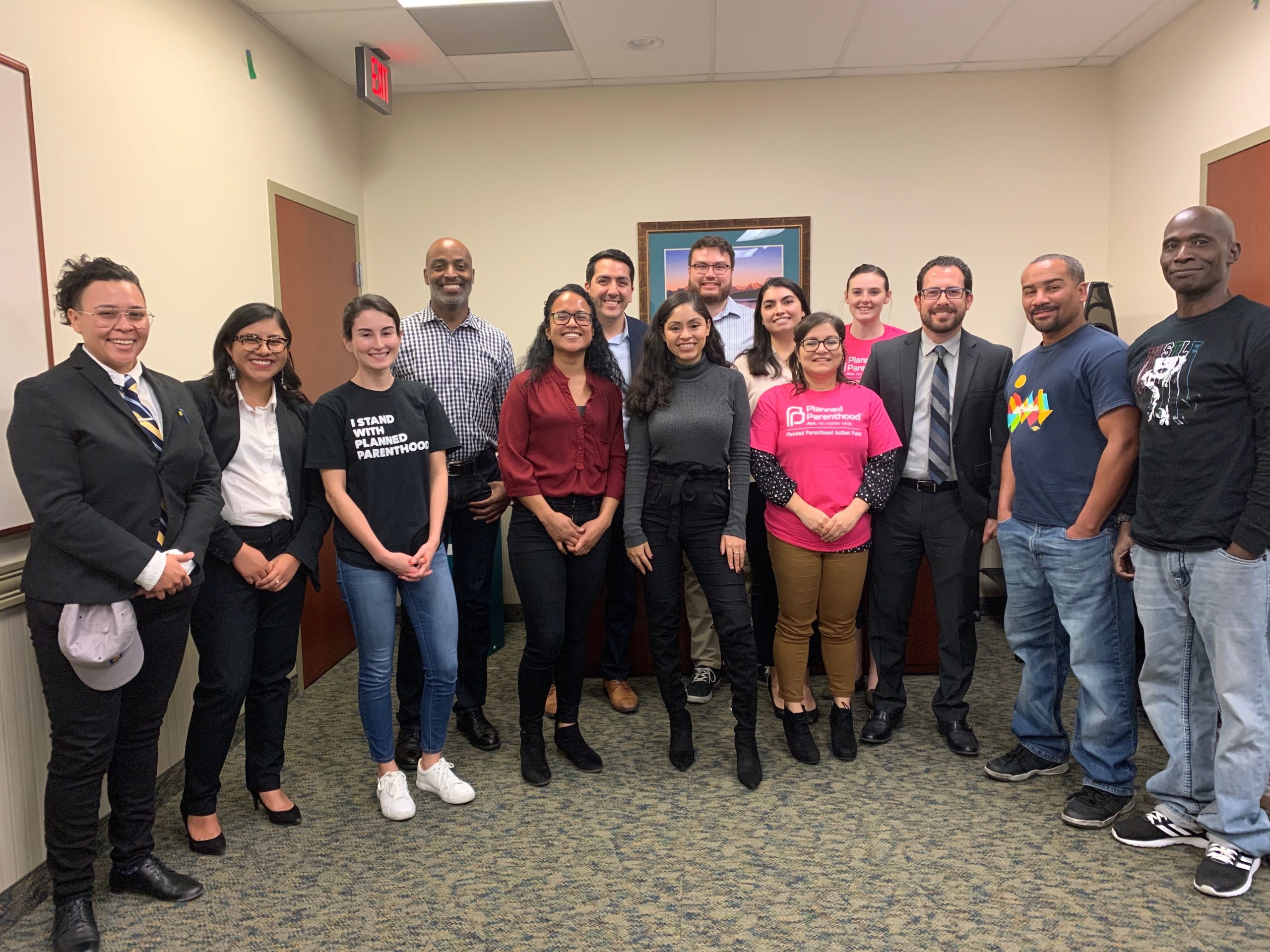 Posted at 01:21h in News, Releases by admin
0 Likes
Share

LAS VEGAS, NV – Today, representatives and volunteers of organizations gathered at the Lloyd D. George US Courthouse to deliver over unique 200 signatures from Nevadans on a digital petition opposing the confirmation of 9th Circuit Court nominee, Lawrence VanDyke, to Senator Catherine Cortez Masto and Senator Jacky Rosen. Both Senators have issued statements and have spoken on the Senate floor opposing VanDyke’s confirmation on the basis of his “Not Qualified” rating from the American Bar Association, his lack of ties to Nevada, and his legal work indicating hostile views toward LGBTQ+ rights, abortion, and environmental protection.

Will Pregman, Communications Director for Battle Born Progress, said, “The nomination of Lawrence VanDyke is President Trump’s latest assault on the integrity of our federal judiciary. His nomination occurred without the input or inclusion of Senator Catherine Cortez Masto or Senator Jacky Rosen, whom we thank profusely for being so vocal about their mutual opposition to this atrocious choice to represent our state on the 9th Circuit. Today’s petition delivery is about Nevadans saying we have their back in stopping this nominee.

Nevadans overwhelmingly support reproductive freedom, the right to marry who you love, and the protection of our public lands and natural resources. The last thing we want or need is an unqualified, narrow-minded carpet-bagger, with no ties to Nevada, to be installed as a rubber-stamp for the regressive agendas of special interests and wealthy corporations. In addition, VanDyke’s complete breakdown in composure during his Senate Judiciary hearing speaks volumes about his lack of fitness for a lifetime federal judgeship.”

Lindsey Harmon, Executive Director, Planned Parenthood Votes Nevada, said, “Lawrence VanDyke’s record, whether it be his short stint in Nevada as Solicitor General during which he refused to take the state Bar exam or his failed run for the Montana Supreme Court, speaks for itself. In addition to VanDyke’s inexperience, his extreme anti-abortion and anti-LGBTQ+ views demonstrate just how bad this nomination is for Nevadans. We deserve a Ninth Circuit nominee who shares our values on abortion rights, especially as the right to safe, legal abortion care is increasingly under attack nationwide.

Planned Parenthood Votes Nevada thanks Senators Catherine Cortez Masto and Jacky Rosen for their efforts to protect Nevada’s seat on the Ninth Circuit from ideologically extreme nominees like Lawrence VanDyke. Their efforts to ensure that Nevadans are represented at every level are commendable.”

“Lawrence VanDyke has made clear that he has no intention of upholding the rights of LGBTQ people,” said Human Rights Campaign President Alphonso David. “From his college writings to his roles in government, VanDyke has spent his career consistently opposed to equality for all people, regardless of sexual orientation and gender identity. The Senate should not confirm a judicial nominee who has received a rare rating of ‘unqualified’ from the American Bar Association, in part because of his inability or unwillingness to separate his deeply troubling anti-LGBTQ views from professional decisions demanding legal analysis. Senators should reject this nomination and demand a nominee who will uphold the rights of all citizens under the Constitution, not just some.”

Nevadans deserve a fair-minded justice on the Ninth Circuit Court of Appeals — not a political hack and far-right extremist like Lawrence VanDyke,” said André Wade, State Director of Silver State Equality. “VanDyke’s work with the hate group Alliance Defending Freedmon and his abhorrent record on LGBTQ civil rights is alarming, contrary to our state’s values and disqualifying. We strongly urge the U.S. Senate to block the confirmation of Lawrence VanDyke.”

Andy Maggi, Executive Director of the Nevada Conservation League, said, “To put it simply, Lawrence VanDyke cannot be trusted to uphold the laws that protect our climate, air, water, land, and communities. He has a history of putting the interests of corporate polluters above the interests of the American people and the laws that protect them. I commend Senator Catherine Cortez Masto and Senator Jacky Rosen’s leadership in identifying and calling out this nominee as unfit for the 9th Circuit Court of Appeals.

As the deputy assistant attorney general for the Environment and Natural Resources Division, overseeing federal litigation involving natural resources, VanDyke helped defend against lawsuits involving the Trump administration’s efforts to bolster fossil fuel energy development on public lands. As solicitor general for Nevada, he represented the state in several high profile cases, including the challenge to the Clean Power Plan. We need judges who will put people and environment over oil and gas corporations. The nomination of Lawrence VanDyke should be rejected.”

A thorough analysis of VanDyke’s record was published by the Alliance for Justice. Yesterday, the American Bar Association gave VanDyke a ‘Not Qualified’ rating in a letter which stated, “Mr. VanDyke’s accomplishments are offset by the assessments of interviewees that Mr. VanDyke is arrogant, lazy, an ideologue, & lacking in knowledge of the day-to-day practice including procedural rules.”

As Montana’s Solicitor General, VanDyke advocated for the overturn of Roe v. Wade in an amicus brief he co-wrote to support a 20-week abortion ban in Arizona, and recommended that his Attoreny General also file a brief defending a photogropher who refused business to a lesbian couple in New Mexico. He has also been a loyal foot-soldier for the gun lobby, filing multiple briefs fighting against gun violence prevention legislation across the country.