What I Learned From My Trip to Chicago - Battle Born Progress
424
post-template-default,single,single-post,postid-424,single-format-standard,ajax_fade,page_not_loaded,,qode-child-theme-ver-1.0.0,qode-theme-ver-13.7,qode-theme-bridge,wpb-js-composer js-comp-ver-5.4.5,vc_responsive

What I Learned From My Trip to Chicago

23 Apr What I Learned From My Trip to Chicago

Recently I was given the amazing opportunity to travel to Chicago for the Fight 4 A Future summit. Which focused on criminal justice reform and gun violence prevention, two topics that have been on my mind more and more as time passes. I already had some things in my head from other conversations I took part in before this conference, but many things were added upon or spoken about differently.

We talked about so much during our breakouts and in presentations including the fact the system isn’t broken it’s just working for the wrong people in the wrong way. Sometimes the police aren’t in our communities to protect us, they’re only there to police us. Systematic racism is definitely something that occurs regardless of how much people want to say it’s an issue of the past. There are so many examples of this but the most apparent, for me at least, is the difference in language we use when discussing crimes involving guns between black and a white man. We call the white man lonely and troubled but the black man a thug. The media will use a picture from the white man’s prom, but a picture of the black man hanging with some friends. It can be the same crime but they’re handled two totally different ways. The media definitely has an affect on the way people discuss the event. 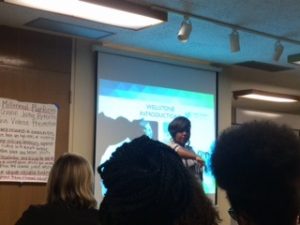 The part of the conference that resonated with me the most was when people shared their personal stories because I was able to hear about the events of what had been headline news from a different perspective. Time and time again we hear about events where a cop kills a black teen, but we’re told about it in a very specific way. You’re told about the thousands of people that caused havoc on the streets or the way the teen was dressed or about a detention he was given in the ninth grade. You’re not told about why the cop confronted the teen, you aren’t told about the fact protesters were brutally beaten by the cops before being arrested, and you aren’t told about the cops paid leave of absence while they figure out how to cover up the crime.

While I can’t give you a one hundred percent rock solid answer as to how to address and fix these various issues immediately, this summit definitely gave me a new found urgency to find that answer. My biggest take away is to continue being a loud voice and strong ally because regardless of what the media does or doesn’t say, there are ways that we can get the truth across and steps we can take to attack this beast of an issue from multiple angles to be most effective.